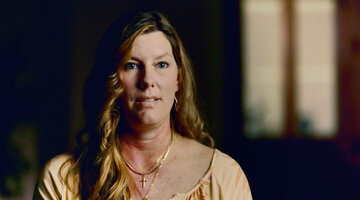 In 2016, Clay County, Alabama became the last place in the state to legalize alcohol. According to locals, it’s a place that’s known for being peaceful.

That serenity was shattered on June 28, 2001 by a frantic 911 call leading to the discovery of a double homicide, according to “Floribama Murders,” airing Saturdays at 9/8c on Oxygen.

Billy and Debbie Triplett, a married couple who ran a grocery in rural Barfield, Alabama, were found brutally slain in their home.

Debbie, 44, was in the kitchen. Her blood-covered purse, which had been ransacked, was near her body.

“Her skull had been crushed, and a knife had been used to cut her throat,” said Captain Joe Nabors, a retired member of the Alabama Bureau of Investigations, who worked the case.

Billy, 52, was in the living room. He had been struck on the head and nearly decapitated, according to Agent Todd Wheeles, a retired member of the Alabama Bureau of Investigation, who knew the victims. ”

The home was processed for possible murder weapons, fingerprints, and footprints. Detectives observed that “narc” had been written on a wall in lipstick in the living room.

Debbie’s children, Michael and Michelle Lambert, and Billy’s son, William Randall “Randy” Triplett, arrived at the scene. While they waited outside, investigators found an empty cash box in a car. It suggested that money was the motive for the murder.

According to Michelle Lambert, when her mother closed the country store, she simply removed the whole cash draw. When they reopened the store, she replaced it. Did someone know that and decide to steal it?

Investigators retraced Debbie’s steps. After she closed the store, she had dinner with Michael. She would have arrived home around 10 p.m. “Her murder had to happen around that time,” said investigators.

Detectives had two theories for the murders: a botched robbery or a drug-related double homicide. But they found no evidence that the Tripletts were involved in any drug crimes or any narcotics investigations.

They considered that “narc” was scrawled on the wall to misdirect them. However, several witnesses stated that Billy sold beer and liquor on the sly. Investigators also learned that he had off-the-books gambling side hustles including poker machines in the back of the store as well. They also discovered Debbie cleaned out the machines — $1 and $5 bills — at the end of the night. She alway put the money in her purse.

Detectives also found out that Billy had been robbed at the store in February: “Three guys came into the store and duct-taped Billy and put him into the walking cooler,” Michelle Lambert told producers.

Billy was able to free himself. Because of the illegal dealings Billy was involved with, the incident was never reported. Detectives had no way to tie that robbery and the murder, though.

Then, a call from someone in the community changed the direction of the case. The caller reported seeing Randy Triplett with a wad of cash while shopping at Walmart.

“That was unusual,” said Wheeles. “Randy didn’t have any money. He wasn’t working. He owed money for child support.”

At the time of the murders, Randy was living with his grandmother, less than two miles from his dad’s home. Word around town, investigators said, was that Randy and Debbie didn’t get along — and that he was using drugs.

Billy supported Randy repeatedly, according to Wheeles. “Debbie had told Billy [that] at some point he's got to sink or swim on his own,” he said. Randy was enraged that his stepmother took that position.

Wheeles confronted Randy about the cash he was carrying, and Randy claimed that high school classmates had taken up a collection and gave him $600. Wheeles knew those classmates, though, and determined that Randy was lying.

Wheeles had more questions for Randy, including his whereabouts at the time of the murders. Randy said that he’d been watching football with his father that evening.

“Randy told us when he left his dad’s house he had a flat tire about a mile from his dad's house,” said Wheeles.

Randy’s alibi seemed to check out. But another unexpected call shone a spotlight on Randy again. The man said that he was in possession of $1 and $5 bills he believed had blood on them. Randy had given him the money for safekeeping.

Randy confirmed that it was his money, and claimed that he found the small bills in his father’s closet. But investigators were doubtful. They had gone through the house with a fine-tooth comb.

Detectives searched Randy's car, and a smudged bloody fingerprint was found during the search. Randy claimed he had injured himself weeks earlier.

The bloody print along with the blood-covered cash was sent out for DNA analysis. At the time, that took six to eight weeks.

“DNA was the best avenue we had to solve this case,” said Nabors.

While awaiting DNA results, the case took a twist. Billy’s car, which had been parked in his driveway, disappeared. It turned out that Randy took the car, forged his father’s signature, and sold the vehicle.

Randy was charged with vehicle theft and forgery.

“The intent was to get him locked up until we could get the forensic report back,” said Wheeles.

The DNA results found that Debbie Triplett’s blood was on the smudged print  in Randy’s car as well as the $1 and $5 bills.

Randy Triplett was arrested for the murders of his father and stepmother. On June 23, 2004 prosecutors in Clay County, Alabama prepared to bring Randy to trial, according to “Floribama Murders.”

They theorized that on the night of the murders, an argument broke out between Randy and his father. He killed Billy Triplett, and when Debbie Triplett arrived home he viciously beat and stabbed her.

Randy denied any guilt and insisted his flat tire was his alibi.

But prosecutors maintained that Randy had plenty of time to murder his parents: “It doesn’t take as long as you think to kill somebody like this,” said Wheeles.

The jury found Randy guilty of capital murder of his father and stepmother, reported wvtm13.com. He was sentenced to life behind bars. On April 7, 2016, Randy Triplett, 45, hanged himself in prison.

To learn more about the case, watch “Floribama Murders,” airing Saturdays at 9/8c on Oxygen or stream episodes here.