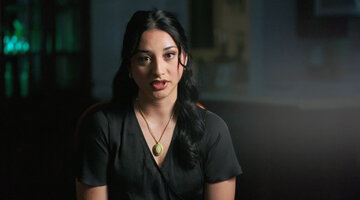 Situated on the dividing line between Alabama and Florida, Jackson County, Florida has a rural, small-town feel.

It has also seen its share of “horrific” homicides, Cheree Edwards, an investigator with the Jackson County Sheriff’s Office told “Floribama Murders,” airing Saturdays at 9/8c on Oxygen.

Raul Ambriz Guillen’s case began with an anxious call from his daughter, Rosa Ambriz, to Edwards. After talking with her dad on July 2, 2020, he stopped answering the phone. He seemingly just vanished.

Guillen had recently lost his job and crashed with friends in Alabama and Florida. When Ambriz had reached out to them, one of the friends, William Shane Parker, told her that he didn’t know where Guillen was: “He’s into things I’m not into anymore,” Parker texted.

Edwards began her investigation by searching for Guillen’s car, which she tracked down across state lines to Houston County, Alabama. She then reached out to Sgt. Ricky Herring, of the Houston County Sheriff’s Office, so they could collaborate on the case.

“We wound up going to a mechanic shop and we found out that Raul’s car was there,” Herring told producers. “But the car had been ransacked ... I knew then that something's not right. We’ve got a missing person who is probably more than a missing person.”

The car was processed for fingerprints and DNA, but that produced no useful evidence.

Investigators also interviewed the shop owner, who said a woman named Lauren Wambles had had the car towed to the shop.

Wambles, who lived near the shop, was a Facebook friend of Guillen's, Ambriz learned. She was also “an ex-porn star,” Ambriz told producers.

“Why would she be friends with my dad?” Ambriz said she wondered.

Investigators questioned Wambles and determined that her boyfriend was William Shane Parker, a man familiar to Herring.

“I knew that he was violent,” Herring said. “It was a red flag for me.”

Parker was also questioned. He said he had met Guillen a few months earlier behind bars.

“My dad was driving with an expired registration,” explained Ambriz, adding that he got arrested and sent to jail.

Parker said he befriended Guillen, who was down on his luck. But Parker then claimed that Guillen got involved with members of the violent MS-13 criminal gang and so the two parted ways, according to “Floribama Murders.”

He portrayed Raul as this “vindictive outlaw drug runner … and that people were looking for him,” said Edwards.

The account didn’t square with Edwards’ knowledge of gang activity in the area, though.

“I did not feel like Shane was telling the truth at all,” Edwards told producers.

Two months after Guillen vanished, Herring got a tip from a reliable informant. The source claimed that Guillen was killed at the home of Jeremie Peters. They claimed that Peters didn’t act alone.

In a recorded interview, the informant stated that Wambles and Parker were there, too, and that Parker was the one to shoot Guillen “in the back of the head.”

The source agreed to take investigators to where Guillen was killed and buried in Holmes County. Edwards and Herring reached out to John Tate, a Holmes County, Florida sheriff, to assist them in this part of the case. In late August 2020, investigators found the burial site.

As they dug, they saw that a barrel had been cut in half and laid over a body. Guillen was identified by jewelry he was known to wear.

Because of time and weather conditions, “there was no DNA, there were no fingerprints to process,” State Attorney Peter Overstreet told producers. Investigators got a search warrant for Peters’ property, which wasn’t far from the burial site.

In a shed, they found barrels that matched the one at the shallow grave site. They also found Florida State University items at Peters’ house.

“One of the things that Raul again was wrapped in was a Florida State University blanket,” explained Overstreet.

Peters was taken into custody, while Parker was detained at a traffic stop and brought in for an outstanding misdemeanor warrant. Wambles, who was in the car with Parker at the time, was also brought in.

Despite initial reluctance to talk with authorities, Wambles, who said she was pregnant with Parker’s baby, eventually cracked: “She confessed to her involvement in the murder of Raul Guillen,” said Edwards.

Wambles also confirmed that Parker shot Guillen. She told investigators that Parker tossed the gun in a storm drain in Houston County, Alabama after the murder.

RELATED: Man Found Shot In The Face In Florida Keys — Who Would Kill Him?

The handle of the revolver was recovered, and detectives charged Parker with murder.

Through the trial and work of  detectives from three different jurisdictions in Florida and Alabama, a clear picture of what happened to Raul Guillen finally emerged.

On July 4, 2022, Guillen was at Peters’ house. He’d gone there because he was told there were odd jobs for him to do to earn some money. Before Parker shot Guillen, they lit firecrackers to disguise the gunshots. Then, to make sure Guillen was dead, he was beaten with a shovel, according to Wambles.

Guillen was wrapped in a blanket and taken to a logging area, where he was buried.

Thanks to Wambles' plea deal, prosecutors were also able to offer a theory about motive for the murder to the jury.

“Wambles said Jeremie Peters thought himself the local drug kingpin in Holmes County,” said Overstreet. “Peters concocted this belief that Raul was part of a Mexican cartel and he viewed that as a threat to his business."

Killing Guillen would eliminate that threat. Parker acted as "an enforcer."

However, there was no evidence that Guillen was involved in drug trafficking or illegal activity.

Parker was found guilty of second-degree murder and sentenced to life in prison.

Ambriz continues to grieve. “I will never be able to think about my dad again without associating him to the murder and to how gruesome it was,” she said. “It never goes away.”

To learn more about this case and others like it, watch “Floribama Murders,” airing Saturdays at 9/8c on Oxygen or stream episodes here.

Can You Tell Which ‘Florida Man’ Headline Is Fake?