Sign Up for Free to View
License to Kill: Dr. Christopher Duntsch 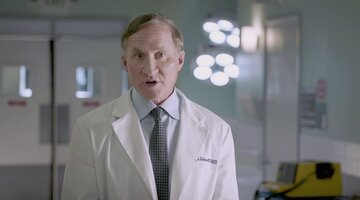 2:42
Preview
License to Kill: The Mind of a Medical Murderer 1:32
Preview
License to Kill: How To Tell If Your Medical Provider May Be Dangerous

Dallas-based neurosurgeon Christopher Duntsch had a hell of a pitch for prospective clients who came to him hoping he could relieve their back pain. “I’m the best,” he’d say, according to local periodical D Magazine. However, those who worked alongside him considered him among the worst surgeons they’d ever seen. “Horrendous” and “pathetic” were how fellow doctors described his surgical skills, despite his impeccable credentials and position in some of the area’s most prestigious hospitals. By the time the law caught up with him, Duntsch had botched numerous operations, most of them resulting in long-term disability for his patients. At least two died following surgery, earning Duntsch the nickname “Dr. Death.”

In 2006, Duntsch began working with two Russian scientists, who had had made significant breakthroughs in stem cell technology, and formed two companies with them. The CEO of DiscGenics, the more successful of the two companies, later forced him out and sued him over money owed, according to the website ProPublica. “We would meet in the mornings, and he would be mixing a vodka orange juice to start off the day,” former investor Rand Page told ProPublica. Page also claimed to have seen a mirror with cocaine on it inside Duntsch’s house.

While a resident doctor, Duntsch allegedly abused drugs while on the job. In a sworn deposition related to one of the malpractice suits against him, a former acquaintance claimed she saw him consume cocaine, prescription drugs and an entire sheet of LSD on his birthday in either 2006 or 2007, according to D Magazine. After partying through the night, she says, he put on his white lab coat to make rounds at the hospital that morning. An anonymous complaint was lodged concerning his alleged drug use, and he was asked to take a drug test. He refused and was subsequently sent to a program for impaired physicians, according to ProPublica.

While the typical neurosurgeon is expected to perform approximately 1,000 operations over the course of their training, the Dallas district attorney’s office determined that Duntsch operated less than 100 times before finishing his residency, according to ProPublica. In late 2010, after finishing at the University of Tennessee, Duntsch moved to Dallas, Texas, and began working in a private practice specializing in back pain and spinal surgery. In November 2011, he was granted surgical privileges at nearby Baylor Regional Medical Center of Plano, Texas.

At Baylor, Duntsch quickly earned a reputation as a braggart. Dr. Mark Hoyle told D Magazine that he would make sweeping pronouncements, such as, “Everybody’s doing it wrong. I’m the only clean, minimally invasive guy in the whole state.” Hoyle assisted Duntsch in late December 2011 in operating on Lee Passmore, who was suffering from severe lower back pain. Hoyle says Duntsch’s performance was so reckless that he physically restrained him at one point to prevent him from performing a procedure that could lead to Passmore’s paralysis, according to USA Today. Passmore awoke from the surgery in excruciating pain, and later learned that a ligament in his leg had been severed, according to D Magazine. He still suffers from back pain and numbness in his feet.

Weeks later, in January 2012, Duntsch performed a routine spinal fusion on Barry Morguloff. He was assisted by Dr. Randall Kirby, a surgical veteran of 16 years. “Pathetic,” is how Kirby would later describe Duntsch’s abilities as a surgeon, in a letter to the Texas Medical Board, likening them to those of a first-year medical student, according to the Texas Observer newspaper. Following surgery, Morguloff’s back pain increased and he suffered from numbness in his left leg. Bone fragments were later applying pressure to the nerves of his back. He is unable to put weight on his leg to this day without the aid of a special boot, according to local ABC affiliate WFAA.

The next victim of Duntsch’s incompetence and indifference was Jerry Summers, a friend from high school. Summers had followed Duntsch to Dallas and helped him set up his practice. Former assistant Kimberly Morgan said in a deposition that when not working together, the friends were partying together, according to D Magazine. In February 2012, Duntsch performed surgery on Summers to help alleviate pain and numbness from a prior injury. Instead, he lacerated one of the arteries running along the spine, causing massive bleeding and paralysis, according to the Texas Observer. Summers remains paralyzed below the neck to this day. Following the surgery, Baylor suspended Duntsch’s surgical privileges for 30 days.

The next time Duntsch put on his surgical scrubs it would lead to death. Kelli Martin, 55, came to Duntsch in hope of relieving back pain from a fall. Her simple 45-minute surgery stretched to 2 hours, during which Duntsch again cut a major artery running along the spine. Martin died hours later from blood loss, according to the Texas Observer. Soon thereafter, Duntsch resigned his medical staff privileges to practice at Baylor.

Duntsch moved on to the Dallas Medical Center, where, in the space of 24 hours, one patient died and another was permanently crippled. On July 24, 2012, he operated on Floella Brown, 63, cutting her vertebral artery, resulting in massive bleeding and a fatal stroke, according to D Magazine. Hours later, he butchered septuagenarian Mary Efurd, amputating a nerve root and leaving surgical hardware embedded in her back muscles, according to the Texas Observer. Dr. Robert Henderson, who performed Efurd’s corrective surgery, told the Observer he initially thought Duntsch was posing as a doctor. “I couldn’t believe a trained surgeon could do this,” he said.

As a result of his botched surgeries, Duntsch was fired from the Dallas Medical Center in July 2012 and reported to the Texas Medical Board. However, this did not prevent him from performing more surgeries. In the spring 2013, he operated on Jeffrey Glidewell, cutting a spinal artery, damaging his esophagus and leaving a surgical sponge in his throat, before sewing the wound shut, according to the Texas Observer.

Duntsch’s physician’s license was suspended in the summer 2013 and permanently revoked that December. According to Rolling Stone magazine, of Duntsch’s 38 patients, 31 were left permanently paralyzed or seriously injured, and two died. Those in the Texas medical community began to talk of the need for a criminal investigation while prosecutors looked into what course of action to take.

Much like his medical career, Duntsch’s personal life began to fall apart. He filed for bankruptcy and moved in with his parents in Colorado. In early 2014, he was arrested for DUI and sent to rehab, according to ProPublica. Back in Dallas to see his children, he was arrested again in April 2015, after trying to steal almost $900 worth of clothing from Wal-Mart, according to the Texas Observer.

In July 2015, Duntsch was indicted by a Dallas County grand jury on six counts of aggravated assault with a deadly weapon. The indictment listed “hands and surgical tools” as his deadly weapons, according to court documents . As his trial got under way in February 2017, prosecutors presented a rambling email Duntsch sent to former assistant Kimberly Morgan. “I am ready to leave the love and kindness and goodness and patience that I mix with everything else that I am and become a cold blooded killer,” he said in the letter, which was quoted at length by The Dallas Morning News. At another point he describes himself as “a mother****ing stone cold killer that can buy or own or steal or ruin or build whatever he wants.”

After a 13-day trial, it took the jury four hours to find Christopher Duntsch guilty of injury to an elderly person. In their case, prosecutors chose to focus on Mary Efurd, since the injuries to her were felonious and carried the harshest penalties, according to The Washington Post. A week later, after several days of testimony from his victims, Duntsch was sentenced to life in prison, according to Dallas CBS affiliate KTVT.  After appealing his sentence, his conviction was upheld in 2018, according to D Magazine.

For more harrowing tales of medical malpractice, tune in as Oxygen investigates the jaw-dropping cases of murderous doctors, nurses and medical professionals in “License to Kill” on Saturday, August 8 at 7PM ET/PT.  Hosted by renowned plastic surgeon Dr. Terry Dubrow (“Botched”), the series chronicles the harrowing accounts of patients put into jeopardy by medical professionals’ insidious use of their expertise.

This story has been updated based on information received from Baylor Regional Medical Center at Plano.