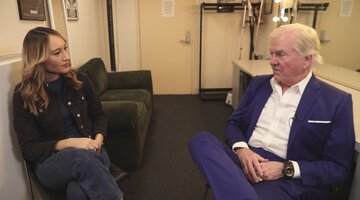 Now Playing
1:42
Digital Original
John Douglas Discusses How He Got Involved With The Cases For Amanda Knox And Damien Echols

Despite calling herself "unremarkable" at a true crime panel held on Saturday, Amanda Knox has not led an unremarkable life. Once a convicted murderer and the constant target of tabloid fodder, a now-exonerated Knox's life continues to be interesting — just in a different way.

Knox’s ordeal started when her former roommate Meredith Kercher was murdered in Italy while they were both studying abroad there in 2017. Only 20 at the time of the killing, Knox and then-boyfriend Raffaele Sollecito were convicted of Kercher’s murder and sentenced to lengthy prison terms, but an appeals court threw out their convictions in October 2011, citing a lack of evidence. Knox and Sollecito would be fully exonerated in 2015.

Knox spent nearly four years in an Italian prison after having her character totally ripped apart by tabloids. Her initial reactions after the murder of her roommate were scrutinized in European media, which often painted her as sex-crazed — mainly because she was seen kissing her former boyfriend in the immediate aftermath of Kercher’s killing.

Amanda Knox, who was exonerated of the murder of her roommate in 2015, at "Death Becomes Us" Festival. Photo: Nicholas Karlin

Despite the media depicting her as a diabolical femme-fatale, even dubbing her “Foxy Knoxy” during her trial, Knox thought of herself as “just a language nerd” and a “hippie kid,” as she said at a panel entitled “Wrongfully Accused,” held on Saturday in New York City, which was part of the multi-day true crime festival Death Becomes Us.

“I wasn’t that remarkable,” she insisted.

Regardless, what she went through certainly was out of the ordinary. She explained that while imprisoned, she would, as a coping mechanism, have imaginary conversations with a younger version of herself, telling her, “This is going to hurt but you’re still gonna live."

Well, that's exactly what she did. So what is life for Knox like now post-exoneration?

She received a warm welcome home

“I came home and there were people who gathered around me and helped me find an apartment,” Knox said. “I was not dropped off outside the prison gate with a garbage bag of clothes and told, ‘Good luck.' Most people just get a garbage bag of a life that happened 30 years ago and they are expected to walk away from that and be a person.”

Knox said when she arrived back home in Washington state, hundreds of people had showed up, some with signs that read, “Welcome home, Amanda.”

Not everyone is supportive of her, though. There are still plenty of people who think that Knox is guilty, and she admitted she spends a lot of time feeling like she needs to explain herself. As a result, her morning routine isn’t just coffee and breakfast. It includes deleting vicious social media comments.

“I kinda have this daily morning routine where I go on my social media profiles and delete all the nasty comments and block all the people that make mean comments to me,” she said. Knox said that while she acknowledges that these kind of comments are now part of her existence, “It’s not nice. It’s not like it doesn’t hurt me but at the same time I know these people hate someone that’s not me.”

By deleting the comments, Knox explained she's choosing to limit the amount of negativity that she allows to infiltrate her life.

She works in the media

While tabloid journalism tore Knox apart following her former roommate’s murder, different forms of media, including the 2016 documentary “Amanda Knox," have depicted her in a more positive light.

In fact, she's even joined the media world herself. Within weeks of being exonerated, she began writing for a local newspaper in Washington under a pseudonym. A month after her exoneration, she said she reviewed a book for the paper and then mustered up the courage to go to a reading for that book in public.

She met up with the author, as well as another, who told her “we should be friends,” an idea that blew her mind at the time, but made her happy.

“They became my first friends,” she said of the two authors.

One of those authors, Christopher Robinson, became more than just a friend: He's now her fiancé. In November, he asked her to marry him with an E.T.-inspired proposal.

In an adorably nerdy engagement video posted on her Instagram, Robinson leads Knox to their backyard where a makeshift meteorite sits on the lawn. The theme from “ET: The Extra-Terrestrial” is playing as Knox approaches the "meteorite." Inside of it: a tablet detailing the couple’s romance.

"I had been thinking about this, but it's already happened in the future," Robinson says in the video. "It's happening now. I don't have a ring, but I do have a big rock. Will you stay with me until the last star in the last galaxy burns out and even after that? Amanda Marie Knox, will you marry me?"

She has a podcast

Knox hosts a podcast called “The Truth About True Crime.” The first season was about the Jonestown Massacre and the second season, currently airing, is about the Alamo Christian Foundation, in which Knox “uncovers the methods the Alamos used to capture people” and  “the mental and physical maltreatment” the victims endured.

She has a web series entitled “The Scarlet Letter Reports” where Knox sits down with other women who have been sexualized and demonized by the media. One episode focuses on actress and revenge-porn victim Mischa Barton, while another concentrates on Anita Sarkeesian, a feminist video blogger targeted during GamerGate.

Knox sported a sassy felt hat at Saturday’s panel, and just hours before that posted a hat-inspired Instagram post. Is becoming a milliner the next career move for Knox? Actually, maybe. She recently told Vulture that a part of her just wants to hide away in a closet and make hats.