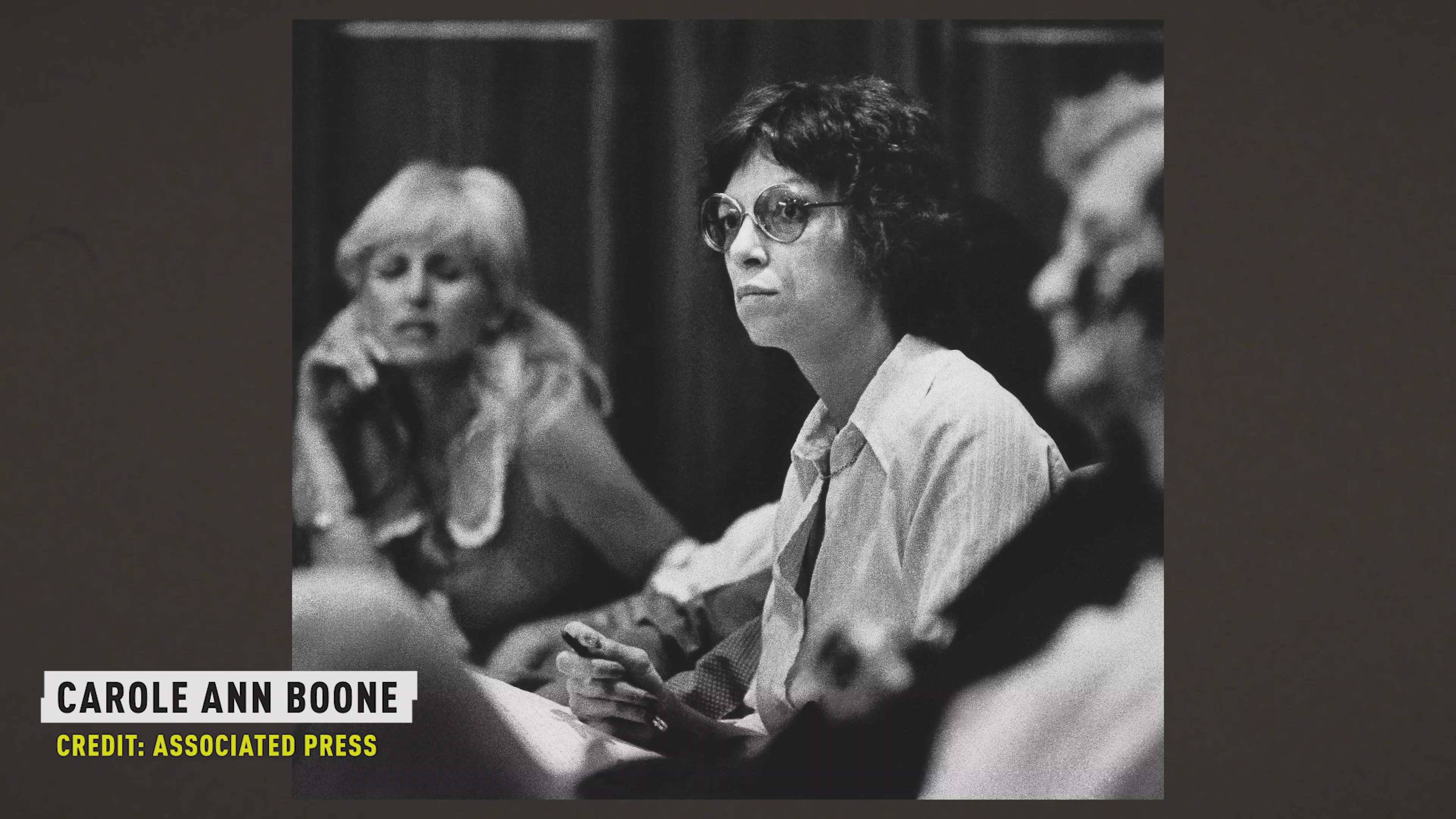 There was no white wedding gown or walk down an aisle for Ted Bundy’s wife, Carole Ann Boone, who married the notorious serial killer while testifying on the stand in his 1980 trial for killing a 12-year-old girl.

The nuptials came as a surprise to those in the courtroom, who had been hearing the gruesome details of how Bundy abducted Kimberly Leach from her junior high school in Florida, just before the declaration of love between the two began.

Jurors would recommend he be sentenced to death for the crime just a few hours later.

It was a calculated move by Bundy to exploit a loophole in the legal system, after a request to wed at the jail had been denied by Orange County jail officials.

Bundy was able to orchestrate the vows because he was serving as his own attorney in the trial and was able to call Boone as a witness, making their vows legal because they said them before a judge and a notary, who had been hired by Boone to sit in the courtroom during the testimony.

Before the vows were said, Bundy asked Boone whether she had ever seen him to be violent, according to a 1986 article in the Orlando Sentinel.

“I’ve never seen anything in Ted that indicates any destructiveness toward people,” she said.

Bundy then asked her, “Do you want to marry me?”

After she confirmed that she did, he also professed his desire to marry, before saying “I do hereby marry you.”

Footage from the unorthodox wedding vows was included in Netflix’s documentary series, "Conversations With A Killer: The Ted Bundy Tapes."

But just who is Carole Ann Boone, Bundy’s one-time wife and mother of his daughter Rose (who was also known as Rosa).

Little is known about Boone’s life in the years before she crossed paths with the prolific serial killer or after she later divorced him while he was awaiting execution.

But there are a few public details about the woman who seemingly won Bundy’s heart.

The pair first met in the summer of 1974 while working together for the Washington State Department of Emergency Services, according to “The Only Living Witness: The True Story of Serial Killer Ted Bundy.”

Boone is described in the book as a “lusty-tempered free spirit” who was going through a divorce from her second husband and was raising her son Jamey when she met Bundy.

“I liked Ted immediately. We hit it off well," she said according to the book. "He struck me as being a rather shy person with a lot more going on under the surface than what was on the surface. He certainly was more dignified and restrained than the more certifiable types around the office. He would participate in the silliness partway. But remember, he was a Republican.”

She said Bundy expressed a desire to date her, but instead the two developed a deep sense of friendship with one another at the time.

“I guess I was closer to him than other people at the agency,” she said.

That friendship may have extended to helping prepare a prison escape as well. According to Rolling Stone Magazine, it’s believed Boone may have smuggled Bundy cash to aid in his 1977 prison escape.

After he was arrested in Florida and was facing two murder trials—first for the brutal slayings of two college sorority girls and then for Leach’s death—Boone would travel to Florida to support Bundy who she called her “buddy” according to the docuseries.

“Let me put it this way, I don’t think that Ted belongs in jail. The things in Florida don’t concern me any more than the things out west do,” Boone said in a news clip played in the Netflix series.

When asked whether she thought the murder charges against him were “trumped up” she smiled before telling the reporter, “I don’t think they have reason to charge Ted Bundy with murder in either Leon county or Columbia county.”

Boone was just one of many female groupies who showed up at the courthouse to get a glimpse of the charismatic killer, some of whom even dressed up like his victims.

"There was an assumption about Ted's victims: that they all wore their hair long, parted in the middle, and wore hoop earrings,"  Stephen Michaud, co-author of "Ted Bundy: Conversations With A Killer," once told "E! True Hollywood Story." "So, women would come to court with their hair parted in the middle, wearing hoop earrings. A couple of them even dyed their hair the right kind of brown. [...] They wanted to appeal to Ted."

Boone and Bundy’s relationship apparently blossomed during the trials, eventually leading to the courtroom wedding.

In court, Bundy said their relationship had developed into a “more serious, romantic thing” several years before the 1980 nuptials, the Orlando Sentinel reported in 1986.

After Bundy’s conviction, Boone moved to a home in Gainesville about forty miles from the prison and began making weekly visits to the prison with her son, Jamey, according to "The Only Living Witness."

“Touching was permitted, and from time to time, intercourse was possible behind a water cooler, in the restroom, or sometimes at the table,” authors Michaud and Hugh Aynesworth wrote.

Boone also allegedly took Bundy drugs vaginally, Michaud said in the Netflix documentary, where many of his taped recordings with Bundy over the years were played.

“They were crazy together. Carol loved him. She told him that she wanted a child and somehow they had sex in the prison,” he said in the Netflix series.

Boone herself is also heard in the series saying there was a guard at the prison who was “real nice” and often looked the other way.

“After the first day they just, they didn’t care,” she said in the taped recording. “They walked in on us a couple of times.”

Bundy and Boone would go on to have a child together named Rosa in 1982 while he was on death row. The pair even sent out Christmas cards from their unconventional family, Boone’s friend Diane Smith recalled in the new Amazon docu-series “Ted Bundy: Falling For a Killer”.

“She talked about the circus that was at trial and Ted’s side of it and how she could believe that he could be innocent,” Smith said of Boone.

The friends met through their connection to a Gainesville citizens group against the death penalty.

Trish Wood, producer and director of “Ted Bundy: Falling For a Killer,” told Oxygen.com that Boone surrounded herself by people who were “buttressing” her belief in Bundy’s innocence.

“She was supported by people in the anti-death movement in Florida as well, so, you know, she was obviously in some kind of denial about it, but she certainly had support,” Wood said.

Smith also revealed details of Boone’s past in the docu-series that could have made her more susceptible to Bundy’s influence.

Smith said Boone’s brother had drowned in a swimming pool when he was 15 years old and that Boone had always been plagued by grief. She believes Boone may have seen Bundy as a way to try to save a life after being unable to save the life of her brother.

“She’s been vilified and maybe rightly so by people who didn’t understand her, but when you learn more about her, she becomes a much more, in my view, sympathetic character,” Wood told Oxygen.com.

But over time, the relationship between Boone and Bundy began to crumble.

“He was exhausting, obsessive, demanding, moody, always needing as if she didn’t have enough to do,” Smith said of Bundy adding that eventually Boone “was just tired of him.”

As was it becoming less likely Bundy would win a stay of execution, Smith said he called Boone and asked if he should start giving up information about where some of the bodies had been discarded to try to win more time before being executed.

“That was his way of telling her. That there were bodies that he knew about and that he had actually killed all those people,” Smith said in the series. “That call was just devastating for her. She was really angry. I am surprised she talked to him at all. And he wanted to talk to Rosa and she said no. So, there was no goodbye for Rosa.”

Boone divorced Bundy and stopped bringing his daughter to see him in prison.

After the fallout, she and her daughter slipped out of the spotlight and little is known of the life they led after they left the charismatic killer behind.

Boone died in a Washington state retirement home in 2018, according to the docu-series.