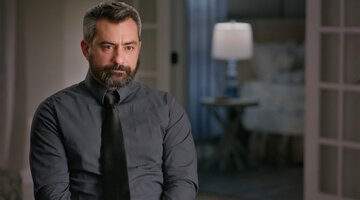 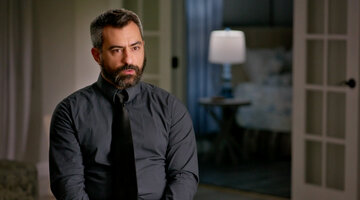 2:08
Exclusive
What Happened the Night of Keith Yunk’s Murder?

On December 15, 1991, Keith and Anita Yunk were asleep in their bedroom in their Largo, Florida home — then the spouses were awakened at 3 a.m. by an intruder who was beating and stabbing them.

Anita’s 12-year-old son, Jason Rawley, also woke up from the noises of the attack. He’d been asleep in another bedroom with two of his siblings in the blended family. In the hallway Jason saw Keith, who was wounded and bleeding profusely.

He also saw the attacker, who was in a disguise, but “had murder in his eyes,” Jason told “Sleeping with Death.”

Anita had several serious wounds but she managed to grab a baseball bat and clobbered the intruder in the head. At the same time, Keith called out to Anita to get the gun. The attacker fled.

Jason tried to call 911, but the phone line had been cut so Anita ran to a neighbor’s house to call 911.

Keith, 31, died at the scene. Anita, 34, who was gravely injured, was airlifted to a local hospital.

Jason and his two siblings were brought to stay with chaperones, while police processed the crime scene. They observed that a back sliding door was open and that an exterior phone line had been severed. That pointed to premeditation.

Despite the gravity of her injuries, Anita said she didn’t recognize the attacker who struck her with an ax and stabbed her. Anita also said the phone line had been cut two months earlier in an unsolved incident.

“One of the significant pieces of information we were looking for was who was the initial focus of that attack — Anita or Keith,” said former Detective, Largo Police Department Mike Short.

Police learned that Anita was a stay-at-home mom and part-time bookkeeper. Keith was an air conditioning technician. Keith and Anita were both divorced with ex-spouses.

Smith reached out to Basse, whose girlfriend, Connie, told him that Basse had gone out hunting and was expected home that night at 7 p.m. Detective Smith stationed a patrol car outside Basse’s home. He arrived back Sunday right at 7 p.m., 16 hours after the attack.

Basse accompanied officers to the police station, where they informed him that Anita had been brutally attacked and that Keith was killed in the home invasion. Basse was cooperative but never once asked about Anita during the interview, said Smith.

Because he had gone hunting on his own, no one could verify Basse’s account of his whereabouts at the time of the murder. But with no physical evidence linking Basse to the crime scene 2,600 miles away, Short asked him to share saliva, blood, and hair samples. Basse agreed.

Then, on December 16, detectives got a break. A bloody mask and glove was recovered from a golf course a mile from the Yunk home. Blonde hairs were collected from the mask.

On Tuesday, December 17, there was another huge development in the case. Against the odds, Anita survived her injuries. She was able to give a firsthand account of the attack that killed her husband and left her severely injured.

“I really can't think of anybody that has any direct benefit from me not being around,” she said, adding that there was one exception: Basse would gain because he would get custody of their kids and no longer have to pay child support.

Anita said she was a single mother to Jason when she met Basse. They married in 1981 and had three more children. They had 10 good years but it turned rocky, as Basse was a Jekyll and Hyde personality, she described.

Basse decided to pursue a job as a firefighter in Boise. The plan was that he would go there first and then Anita and the kids would stay in Florida and join him after six months. Anita ultimately decided to stay behind for good, and filed for divorce. Basse got just two weeks of supervised visits with his children.

RELATED: Woman Conspired With Her Nephew To Murder Her Husband — But Why?

Around the same time, Anita met Keith. They married about six months after her divorce came through.

Two months after they wed, Basse arrived with his girlfriend, Connie, and her son to collect his kids for a trip. Anita grew concerned that Basse planned to take off with the children and refused to allow them to leave with him.

Basse shot to the top of the suspect list.

“This gave us the feeling that we were onto a motive,” said Carroll. “The motive would probably be the children.”

In January 1992, forensic results on the ski mask and glove came back from the lab. Basse was not a match.

Investigators refocused on Keith’s ex, Linda, who dropped a revelation. She said that early in her marriage to her husband, Steve, she had sex with Keith. Could Steve have sought revenge?

Linda and Steve agreed to do polygraphs, and the results were inconclusive. But although investigators didn’t officially rule out this lead, they didn’t believe these were the murderers.

The case stalled until March 5, 1992. Basse’s girlfriend Connie reached out to authorities and said she had information about his involvement in the crime.

Connie told police that in June 1991, six months before the murder, Basse had said he was going biking in the mountains, but that was a lie. He told Connie instead he went to Florida and tried to get into Anita’s house and he cut their phone line.

In a recorded interview with police, Connie said, “Luther told me that he can kill Anita and have no no regrets about it.” He viewed Anita “as a bad mother and a terrible housekeeper,” the Tampa Bay Times reported.

Connie pleaded with Basse to move on. He couldn’t. She told officials Basse used a fake ID to fly to Florida the weekend of the murder.

Basse was brought in for questioning and confessed to sneaking into his ex-wife’s house with the plan to kill Anita. Keith was not the target, he explained.

“I have nothing against Keith. But you made your bed. You're gonna die in it,” he said.

Basse fled the scene and stole a bike and pedaled six miles to the airport. He then boarded a flight and made it home on schedule.

“I did what I believed was right … If it means I go to the chair, I’ll walk through the chair,” Basse is heard saying in a police recording.

The trial began in March 1993. He was convicted and sentenced to life in prison.

To learn more about the case, watch “Sleeping with Death,” streaming now on Oxygen.

Who Would Shoot A Mom To Death As Her Kids Slept By Her?

Killers Stabbed Iowa Teacher As His Daughter Slept In Next Room