Sign Up for Free to View
Was Justice Served for Curtis Holder? 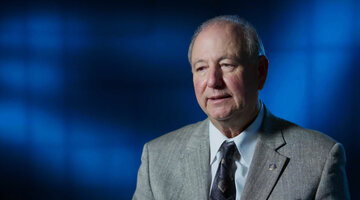 On May 30, 1997, Curtis Holder was found savagely murdered on his kitchen floor. While evidence pointed to a robbery gone wrong or vengeful gay lover, his death had in fact been orchestrated by his wife, Barbara.

Curtis was born in 1949 and grew up in Houston, Texas. In his early 20s, he began working for the Xerox Corporation, where he was known for his honesty and work ethic, and quickly rose through the ranks.

“He worked on a copier that actually was on NASA, this million-dollar copy machine that no one else could work on but him,” daughter Leslie Holder told “Snapped,” airing Sundays at 6/5c on Oxygen.

In 1978, Curtis met 19-year-old Barbara Shaw. Despite their age difference, the couple hit it off and were married in 1980. They had two children together, Christopher and Leslie. Thanks to Curtis’ thriving career, the Holders were able to buy a home in League City, Texas, a Houston suburb. Barbara stayed home with the kids, while Curtis worked.

But any domestic bliss ended for good in 1997.

On the evening of May 30, 1997, League City 911 received a call from one of the Holders’ neighbors, saying Barbara Holder had come to their front door claiming that she found a dead body in her home.

The caller handed Barbara the phone. “There’s just a lot ... there’s a lot … can’t tell who’s it is 'cause there's like plastic bags over the top of the body and there’s blood all over,” a distraught Barbara is heard telling the dispatcher in audio of the 911 call, which was obtained by “Snapped.”

William Allen Schultz Jr., then an officer with the League City Police Department, responded to the call and found an emotional Barbara being comforted by neighbors. Inside the home, he discovered Curtis Holder, 47, dead on the kitchen floor.

“We got hit with this mess, I mean, it was a war zone in there. The body was laying down on the floor and he had a blue plastic bag over his head and part of his chest and over his waist,”  William Schultz Jr. told “Snapped.” “His ring finger had been cut off and was laying over in the corner.”

“He was stripped from the waist down, including his underwear. The body contained multiple knife wounds. There were a number of shoe impressions on the floor in the blood,” prosecutor Michael Guarino added.

Barbara told detectives that she had last seen Curtis that morning and had spent the day running errands. She returned home after picking up 5-year-old Leslie from school and found her husband unresponsive on the kitchen floor.

Neighbor Sylvia Yeats assisted with the timeline when she told detectives she saw Curtis arrive home that afternoon around 4 p.m. Yeats also added that her home had been burglarized several days earlier. Was that why Curtis was killed?

Though the Holders’ home appeared to have been ransacked, there were no signs of forced entry. Some drawers had been pulled out and dumped on the floor but others were undisturbed and valuables were left behind.

The Holders' kitchen, where Curtis had been found, showed obvious signs of a struggle. A large cutting block was missing its largest knife.

“He was stabbed 93 times in the face and chest,” said Schultz Jr.

The medical examiner even determined the stabbing had continued past the point of death.

Barbara told detectives that she and Curtis had struggled during their 17 years together. She claimed he was controlling and blamed her for their financial problems.

The Holders had separated a year earlier, but Curtis moved back five months before his murder. Neighbors attributed the reconciliation to Curtis doing what he thought was best for the kids.

Barbara also said she suffered from depression and suicidal thoughts and had checked herself into a hospital several weeks earlier. She suspected Curtis was a closeted gay man and was having an affair with one of two men, a person named Brett or someone named Jerome.

Detectives had found a greeting card from Brett on the top of Curtis’ dresser.

Detectives brought Brett in for questioning. He was initially unable to recall who Curtis was, only remembering after being told he was married to Barbara. Brett then said that he had met the Holders at a party at Jerome's home. He denied having an affair with Curtis, nor sending him a card, claiming it was a forgery.

Detectives next spoke with Jerome, who said he only knew Curtis through Barbara. Jerome told them Barbara had claimed her husband had a dark side and was physically abusive.

RELATED: 'This Is Your Lucky Day,' Shooter Says Before Murdering A Man In Front Of His Girlfriend

Both men had alibis for the time Curtis was murdered and were eliminated as suspects.

The Holders’ neighbors helped give investigators a clearer image of the Holders' marriage. They said the split had been caused by Barbara’s free-wheeling spending and extramarital activities.

“I think she was spending money on 'entertainment.' On drugs, booze, and boyfriends,” neighbor Phyllis Welch told “Snapped.” “There’s nobody ever going to convince me that [he] abused her in any shape, fashion, or form and he never abused those kids.”

Neighbor Cindy Keelan called authorities on June 1, saying Barbara asked her to babysit Leslie while she was speaking with detectives. Barbara called later that night, asking if Leslie could stay longer because she was still with police. Keelan’s caller ID, however, indicated Barbara was at a local motel.

Concerned that Barbara was going to commit self-harm, authorities went to the motel. Her vehicle was found outside but there was no record of her checking in.

Police went from room to room looking for Barbara until they came to one where a man answered the door but refused to let them in. Believing Barbara was in danger, authorities drew their weapons and demanded entry.

“There was a pause for an extended period but after that pause, Barbara Holder came to the door. They could see in the background that there was a male subject also in the room,” said Michael Guarino.

The man identified himself as 33-year-old Mark Dixon. Barbara claimed they had just met several hours earlier at a bar.

Authorities searched the room and found stolen items from the Holders’ home, the homes of their neighbors, and several knives which were consistent with the murder weapon, according to court documents.

When questioned about the items, Barbara denied knowing how they got there.

“If they were in there, I never saw them in there,” she told detectives in her taped interview with police, which was obtained by “Snapped.”

When detectives questioned Dixon about his relationship with Barbara, he told them, “I just met her at a hospital in Texas City about two weeks ago, I’m seeing her and we’re in love,” according to court documents.

Barbara told Dixon about her unhappy marriage and claimed she was abused. She said she would receive a $700,000 life insurance payout in the event of Curtis’ death and offered to pay him and another man $50,000 each to murder her husband, according to local newspaper The Galveston Daily News.

Dixon’s accomplice was 16-year-old Johnny Lopez, who he had befriended after the teenage tattoo artist inked “Barbara” on Dixon’s arm. While Dixon admitted burglarizing the neighboring homes, he said Lopez carried out the murder.

Mark Dixon and Barbara Holder were arrested and ultimately charged with capital murder. Johnny Lopez was apprehended the next day at a girlfriend’s house.

“Initially, Johnny, he tells detectives a few different versions but in the end he has both him and Mark attacking Curtis. He did indicate that he helped undress the body and that Barbara asked him to do that and he believed that was to humiliate the deceased,” former Galveston County Judge Susan Criss told “Snapped.”

Lopez said Barbara paged Curtis on the afternoon of the murder, demanding he come home to discuss an urgent matter before their children returned from school. While waiting for him to arrive, Lopez and Dixon ransacked the home to make it look like it had been burglarized. Upon Curtis’ arrival, the two men went to their hiding spots, while Barbara lured her husband into the kitchen, according to The Galveston Daily News.

“Mark initiated the blows to the head with the wrench, lost the wrench, and Barbara picked up the wrench and started slugging him. And then shortly after that, Johnny jumped up and began to stab him with both knives repeatedly,” explained Guarino.

Johnny Lopez pleaded guilty to first-degree murder in 1998 and agreed to testify against Barbara Holder at her murder trial. He was sentenced to 40 years in prison and is due to be released in 2037.

Following her trial, Barbara Holder was found guilty of capital murder and sentenced to life in prison.

Mark Thomas Dixon was also found guilty of capital murder and received a life sentence, according to court documents.

Both Barbara Holder and Dixon will be eligible for parole in June 2037.