Sign Up for Free to View
The Case Of Nancy Siegel 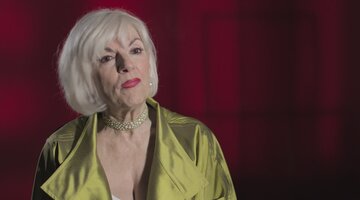 5:43
Exclusive
The Murder Of Jack Watkins

In the early morning hours of May 14, 1996, Loudoun County Sheriff’s Office Deputy Clark Jackson was on patrol when he drove through an overlook in Harpers Ferry National Park and spotted something strange.

“I noticed there was a huge steamer trunk,” Jackson told Oxygen’s “Snapped,” airing Sundays at 6/5c on Oxygen. "I kind of kicked it with my foot and it wouldn’t budge.”

Jackson then opened the trunk and found a heavy duffle bag jammed inside it.

“I unzipped it and I see this one eyeball looking at me and I go, ‘Holy smoke, this is a body!'” Jackson told producers.

It was the corpse of an elderly man. He was emaciated, but hadn’t been dead for long. An autopsy would soon reveal cuts and abrasions on his body, blunt force trauma to the back of his head, and toxic levels of a sedative in his system, according to the FBI.

“He died from an asphyxial death, either manual compression of the neck or suffocation or some combination of both,” former Loudoun County Sheriff’s Investigator Greg Locke told “Snapped.”

Investigators were stumped about who the man could possibly be. The victim had no identification on him. His fingerprints were sent to the FBI, but nothing came up. DNA technology at the time was unable to identify him and his profile didn’t match any missing persons reports. The only clue was nail polish on the outside of the trunk.

A composite sketch and description of the victim was featured on “Unsolved Mysteries” and “America’s Most Wanted,” but to no avail. The case went nowhere for over seven years.

But in January 2003, a break came: The Department of Defense granted the FBI access to its internal fingerprint database, and the victim was finally identified.  He was a World War II veteran named Jack Watkins.

Born Jasper Frederick Watkins in 1920, Watkins grew up in Richmond, Virginia. He enlisted in the U.S. Army in 1941, a couple weeks before the Japanese attack on Pearl Harbor. After the war he worked at an auto store, and in 1964, at the age of 44, he married 40-year-old divorcee Mary Triplet. Triplet had three grown daughters who came to love their mom’s new husband and think of him as a stepfather.

Triplet died in 1989, leaving Watkins alone. He eventually retired, living on a fixed income of $1,200 a month in his modest home in Reisterstown, Maryland, just outside of Baltimore.

In looking at Watkins' finances, a clue emerged: Investigators learned his spending habits changed dramatically in 1995. “Jack withdrew equity in the house and, in addition, Jack purchased a BMW for $44,000,” Greg Locke told “Snapped.”

And most shockingly of all, though Watkins had been dead for years, someone was still cashing in his Social Security checks, which were being sent to a P.O. box in Ellicott City, Maryland.

The P.O. box belonged to a woman named Nancy Siegel. Investigators set up a sting operation, and in Feb. 2003, she stepped up to the window at the Ellicott City post office to get her mail. Carr was waiting for her.

When asked who received mail at the P.O. box, Siegel said herself, her daughters, and Jack Watkins. She claimed Watkins was alive and lived in Pennsylvania with a woman named Ruth, according to court documents.

But Siegel was observed driving to a nearby bank and depositing one of Watkins’ Social Security checks. Investigators ran her name through law enforcement databases and discovered Siegel had an extensive criminal history and had defrauded multiple victims out of hundreds of thousands of dollars, according to the FBI.

So who exactly was Siegel?

She was born Nancy Sweitzer in 1948 and grew up in Baltimore. Her mother ran out on the family and she was raised by her father, who was murdered outside a bar in 1964. As a teenager, she danced on “The Buddy Deane Show,” a local dance show which inspired “American Bandstand” and the musical “Hairspray.”

In 1968, Nancy married her high school sweetheart, Charles Kucharski, with whom she had two daughters. Issues arose, though, in the 1980s when she developed a gambling addiction, resulting in massive debt.

To support her gambling habit, Siegel took out loans and credit cards in her husband’s name without his knowledge. He ended up over $100,000 in debt and had to file for bankruptcy, according to the The Baltimore Sun newspaper in a 2009 report. The couple divorced in 1985.

Soon after, Siegel married a man named Ted Giesendaffer. She used his personal information to obtain loans and stole money from him by altering mortgage-payment checks to make them payable to her instead of the mortgage company, according to court documents. They divorced in 1993.

Though she racked up multiple arrests, they were all in different jurisdictions, making it easy for her to avoid law enforcement scrutiny. She never served more than two weeks in jail.

While selling burial plots door to door, Siegel met Watkins in November 1994. She quickly charmed the septuagenarian widower, who began telling friends that they were engaged.

In short order, Siegel began divesting Watkins of his money and possessions. She convinced him to take out over $60,000 in mortgages and used his identity to obtain multiple credit cards which she ran up and never paid, according to the FBI. Siegel also socially isolated Watkins, making him unavailable to friends and family. She began drugging him and tried to have him committed, The Baltimore Sun reported.

Then, in the summer of 1995, she began a relationship with Eric Siegel, a wealthy loan broker. Fearing Watkins could expose her, she began to plot his murder.

Siegel sold Watkins’ home in April 1996 and pawned off his personal belongings. She moved him into her home, where she began drugging him and starving him to death. He was murdered within the 48 hours before his body was found on May 14, 1996, according to the FBI.

Siegel moved on quickly, marrying Eric Siegel in Dec. 1998. She would go on to defraud him of $300,000, according to court documents. Rather than tell the authorities, her new husband paid off her debts himself.

After locating Siegel in Ellicott City, investigators brought her in for questioning, and when they showed her a photograph of the trunk they found Watkins’ body in, she started to cry. Siegel called Watkins a father figure and told investigators she was his caretaker and that he suffered from dementia.

“According to the medical records that we had obtained, there was no evidence of dementia,” Locke told “Snapped.”

Siegel claimed that in May 1996 she came home to find Watkins dead from an apparent suicide. “She said he hung himself with an extension cord off a ceiling fan,” former Loudoun County Sheriff’s Lieutenant Jamie Koontz told “Snapped.” “That’s not going to happen. I mean, you know, you’re gonna pull the ceiling fan down. You’re not going to be able to hang yourself.”

Detectives interviewed Siegel’s daughters, who were well-aware of their mother’s criminal history. “In addition to all the other persons Nancy defrauded, she also utilized both her own daughters' identities and ruined their credit by opening accounts in their names and charging and not paying the bills,” Locke told “Snapped.”

The daughters also linked the trunk Watkins was found in to their mother.

"The girls were shown a photograph of the trunk Watkins was found in and one of them said, 'Hey, that’s my trunk!’” Locke told "Snapped." She was able to recognize it by her nail polish stains on top.

Siegel was indicted in January 2004. In addition to murder charges, she was charged with bank fraud, theft of government property, identity theft, wire fraud and mail fraud, The Washington Post reported in 2004.

Siegel went on trial in March 2009. After deliberating for seven hours, a jury found her guilty on 20 of 21 counts, including mail, wire and bank fraud, identity theft and witness tampering by murdering Jack Watkins to keep her crimes from being discovered, The Baltimore Sun reported.

A month later, the 61-year-old Siegel was sentenced to 400 months in prison, the equivalent to over 33 years. Now 72, she is due to be released in 2032, according to the Federal Bureau of Prisons.

For more information on this case and others like it, tune in to “Snapped” on Oxygen on Sundays at 6/5c or stream any time at Oxygen.com.