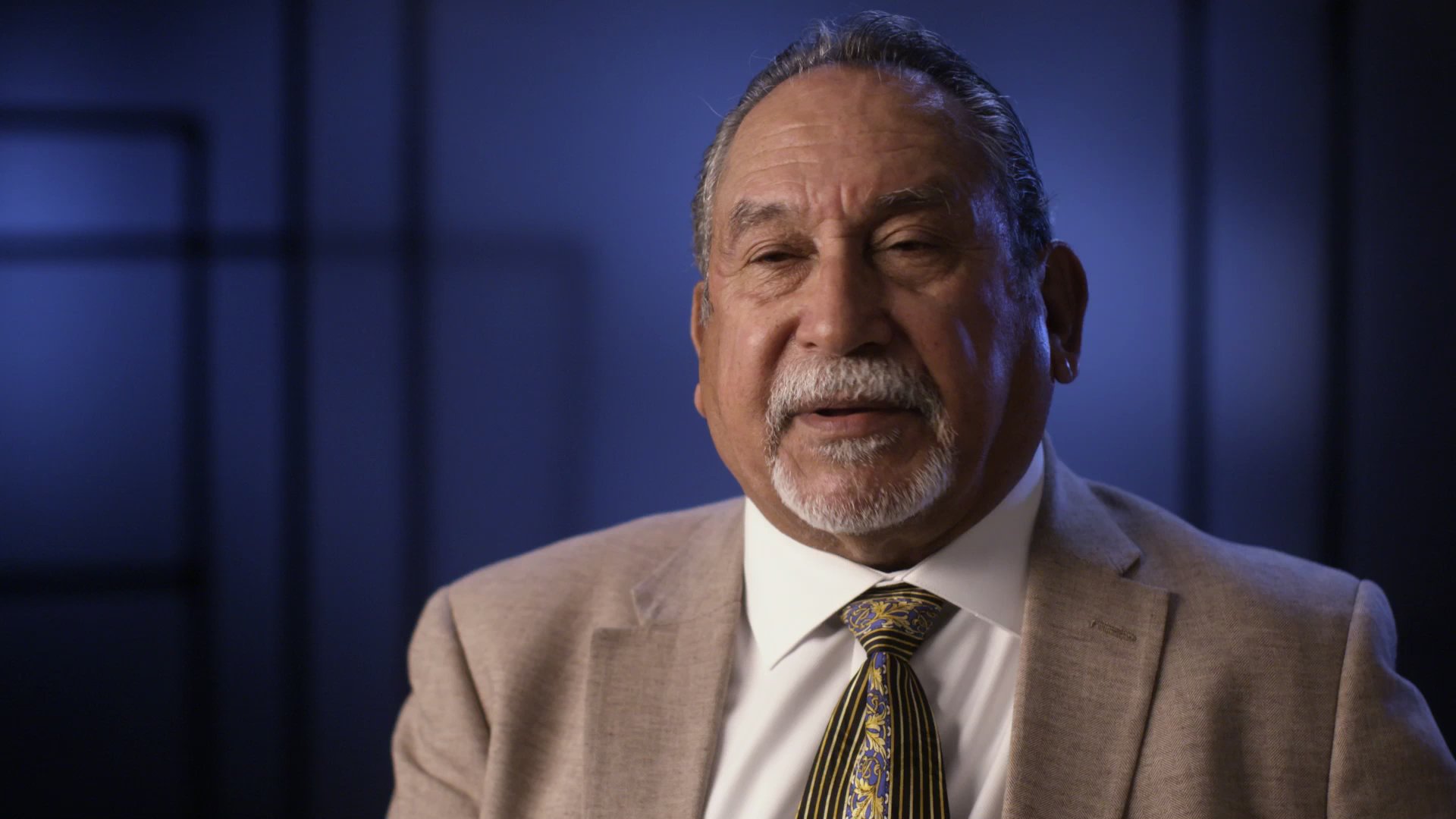 Ever since John Carpenter’s 1978 classic “Halloween” defined the slasher film genre, the idea of a homicidal masked maniac murdering women on the spookiest night of the year has become a horror movie staple.

Tragically, this violent fantasy become a reality in the suburbs of San Jose, California, on Halloween night 1984. That is when William Michael Dennis donned a wolf mask and used a machete to savagely hack apart his pregnant ex-wife, Doreen Erbert.

“Oh, she was an angel,” her second husband, Charles Erbert, told “Snapped,” airing Sundays at 6/5c on Oxygen. “When she smiled and laughed, you couldn’t help not loving her. She was always giving.”

Doreen’s generous spirit led her to pursue a career in medicine, and she eventually landed a job as a physical therapist in the Bay Area. Around the same time, she began dating William Michael Dennis, who went by the nickname “Mike” and worked as a sprayer at the nearby Lockheed factory.

As a child, Dennis had suffered a significant hearing loss, which caused him to stutter, according to court documents.

“That must have been tough with a hearing aid, and in those days, it was a big thing in your pocket and a wire. He didn’t interact a lot. There wasn’t a lot of conversation,” friend Jim Parriott told “Snapped.”

Dennis also suffered from depression and later told a psychiatrist he had trouble “gett[ing] girlfriends,” according to court documents.

In Doreen, however, Dennis thought he had found “the one,” cousin John McDowell told “Snapped.”

After only a few months of dating, the couple got married, and Doreen soon gave birth to a baby boy, Paul Dennis. While Mike relished his role as a father, the stress of being new parents was too much for the young couple to withstand.

They divorced in 1977, and Doreen retained primary custody of their son, who visited Mike on weekends. Mike cherished the time with his son, but he remained bitter about the divorce, according to court documents.

Doreen, on the other hand, quickly bounced back and married local carpet store owner, Charles Erbert. The two had a daughter, Deanna Erbert, in 1979, and they raised her and Paul together.

Sadly, good times did not last for the blended family. In February 1980, 4-year-old Paul climbed through a fence surrounding the swimming pool at the Erberts’ home and fell into the water. Although Doreen was home at the time, she did not realize what had happened until it was too late.

After being pulled from the pool, Paul was put on life support for a week, but he died three days after respirators and feeding tubes were removed.

It was a devastating event for the entire family, but it was especially painful for Mike, who blamed Doreen for Paul’s death. He even went so far as to file a wrongful death suit against Charles and Doreen, and the case went to trial in March 1982.

The jury ruled in the Erberts’ favor, and the couple cut off contact with Mike.

Over the next two years, Mike’s life and mental health continued to deteriorate. He lost his position as a sprayer at Lockheed and had to take a salary reduction to keep his job, according to court documents. More than anything, though, a lingering bitterness continued to eat at him over the breakup of his marriage with the woman he blamed for Paul’s death.

“He thought his son was murdered,” Parriott told “Snapped.” “He believes in his heart that there was intention on [Doreen’s] part.”

The Erberts, however, had something to celebrate after so many past traumas. In 1984, Doreen announced she was expecting a son following two miscarriages in the preceding years.

“Finally, she got pregnant,” Charles recalled in an interview with the Lake County Record-Bee.

The baby was due in early November, just after Halloween. Doreen was under 5 feet tall, and as the birth date drew near, her sister teased her that “she was as far out as she was high,” according to court documents.

On Halloween night, October 31, 1984, Doreen took 4-year-old Deanna out trick-or-treating while Charles handed out candy at home. After Doreen brought Deanna back to the house, Charles went to get more candy and stop by the liquor store. He would later estimate he was only away from the house for about 15 minutes.

Sometime around 9:00 p.m., there was a loud knock on the front door of the Erberts’ home.

“It didn’t sound like a regular knock. It was a little more aggressive,” Deanna Scott (née Erbert), now 40, told “Snapped.”

When her mother opened the door, a man in a wolf mask said, “I’m going to kill you.” In his hand was an 18-inch machete.

“My mommy said, 'Get out of my house,'” Deanna later testified, according to the news service UPI. “My mommy told me to hide behind the couch, so I did.'”

When Charles Erbert returned from the store, he noticed his front door was unlocked. Inside, he found a bloody and horrific scene. Doreen lay in the entranceway while their unborn son was in the living room.

Doreen had been struck repeatedly in the head and body with a large blade, her left hand completely severed, according to court documents. Her 8-month-old fetus had been removed from her abdomen and hacked to pieces, according to UPI.

There was so much blood on the floor, Charles slipped and fell in it. He found Deanna still alive, hiding in the living room.

When first responders got to the scene, they discovered Charles hysterical and covered in blood.

“You could see that the hallway was red, and then that there was a stool with a pumpkin on it,” retired San Jose Police Department Detective Bert Caro told “Snapped.”

By the Erbert’s front door, they found a wolf mask with exaggerated teeth, bulging eyes and a stuck-out tongue. They also discovered a trail of blood leading all the way down the block, where it then suddenly stopped.

Investigators surmised the killer might have gotten into a car and driven away. They gathered blood samples, which, at that time, could only identify a victim or perpetrator’s blood type.

Although Doreen still had a pulse when paramedics arrived, she died on the way to the hospital.

Officers detained Charles for questioning, and another team of investigators spoke to the Erberts’ neighbors. Authorities learned about the couple’s troubled history with Mike and the death of Paul, and they quickly made their way to Mike’s home, which was less than two miles away from the Erbert house.

“I remember there’s a truck on the driveway and I just, with a flashlight, I look in and we see blood on the steering wheel and on the key and on the gear shift knob,” Caro told “Snapped.”

Though Mike didn’t answer the door when they knocked, they saw lights on and heard water running.

“We all looked at each other and the first thing I thought, which everybody thought, somebody’s trying to flush or wash away evidence,” Saldivar said.

After knocking again, Mike answered the door in a robe.

When authorities informed Mike of his wife’s murder, he seemed nonplussed and invited them inside to discuss the case. Investigators noticed a bandage on his right hand, which he claimed was from playing with a knife.

Mike told them he had “nothing to hide” and agreed to let them do a search of his home. Investigators found blood throughout the house and on articles of clothing, more than what could come from a simple knife wound.

“I see all this gauze, all this blood, and I say, ‘You’re under arrest for murder.’ So, I handcuffed him,” Caro told “Snapped.”

While conducting a second, more thorough search of his home, police found a receipt from a hardware store and a label for a machete with an 18-inch blade. In his garage, they also found two handmade coffins, one for Charles, another smaller one for Doreen, as well as body bags, weights and a map of the San Francisco Bay.

“His plan was to dump them in the bay of San Mateo bridge,” Saldivar told “Snapped.”

Mike initially denied murdering his ex-wife, and despite the evidence at hand, it was not strong enough to hold him. He was released after 48 hours.

He was arrested again, however, on Nov. 5, 1984, after a state crime matched Mike’s blood type to that found at the crime scene. Mike was charged with murder with special circumstances, according to the Los Angeles Times, making him eligible for the death penalty.

Detectives were later able to trace the wolf mask found at the Erberts’ home to one Mike wore to a Halloween party the previous year, according to court documents.

“I talk to this girl and she goes, ‘last year we went to this party … he was dressed as a big bad wolf,’” Bert Caro told “Snapped.” “Crossing my fingers, I said, ‘Did anybody take pictures by any chance?’ And she goes, ‘Oh, yeah. The guy took tons of pictures.’”

In September 1999, he was sentenced to die in the gas chamber, according to The San Francisco Examiner.

Today, Charles and Deanna Scott say that for their own peace of mind, they have forgiven Mike.

“I want him to know we survived. And we’re making it. He hasn’t conquered us,” Erbert said in a 2016 interview with the Lake County Record-Bee.

Like many of California’s death penalty convictions, Mike is currently sitting on death row at San Quentin State Prison.