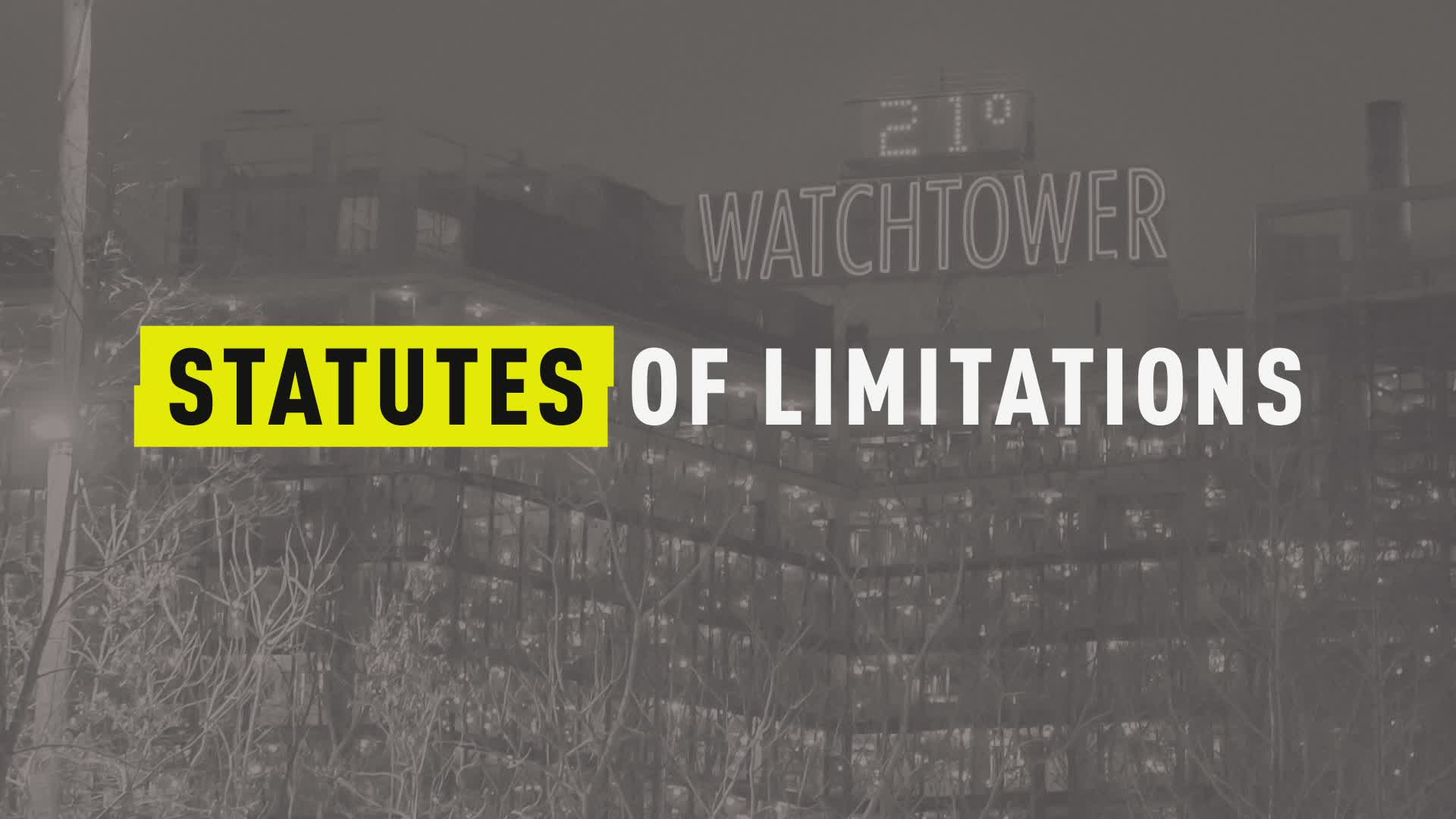 Statute of limitations laws have long silenced the voices of sexual abuse victims—but new legislation in multiple states could give victims of abuse more power in legal battles.

Just last year New York passed the Child Victims Act, a legislative move that could finally give many victims of childhood sexual abuse their day in court.

But New York isn’t alone. In 2019, 23 states and the District of Columbia had reform go into effect that impacted the statutes of limitations, according to data from ChildUSA, a think tank for child protection.

An increasing number of states are also eliminating the statutes of limitations for criminal cases to be filed for some crimes, which depending on the state, could include child molestation, rape or first-degree felonies.

As states embrace new laws, it could lead to significant trouble for religious institutions who have long been accused of harboring child sexual predators, including the Jehovah’s Witnesses and the Catholic Church.

One recent estimate by the Associated Press—based on interviews with dozens of lawyers and clergy abuse watchdog groups—suggested that the new wave of lawsuits against the Catholic Church could potentially include at least 5,000 new cases in New York, New Jersey and California and could lead to potential payouts of more than $4 billion for the religious institution.

“The general public is more disgusted than ever with the clergy sex abuse and the cover-up, and that will be reflected in jury verdicts,” Boston attorney Mitchell Garabedian told the AP.

Under New York’s recent act, adult survivors of child sexual abuse were given a one-year period to file a lawsuit against their abuser or an institution no matter how long ago the abuse occurred, according to CNN.

The one-year-window opened in August and within hours the number of lawsuits filed in the state began to grow. By the end of the first day, 427 lawsuits had been filed throughout the state, including 169 cases in New York City.

"The sheer volume of lawsuits filed today is both simultaneously heartbreaking and encouraging," said a statement issued from the Zero Abuse Project after the filing window opened, according to CNN. "It is indicative of just how deep-rooted the problem of child sex abuse is in our country."

The ability to now hold their abusers accountable provided some measure of vindication for many alleged victims of abuse, who have been tormented by their experiences for years.

"I've been waiting years," James Grein told the news outlet shortly after a lawsuit against disgraced former cardinal Theodore McCarrick was filed on his behalf. "I've suffered many, many years. And this last year has been tremendously up and down and I'm just joyful for the day today."

Lucian Chalfen, director of public information for the New York State Unified Court System told Oxygen.com that as of Dec. 2, 2019, a total of 1,179 lawsuits had been filed as a result of the act.

Pennsylvania also passed legislation in November to eliminate the statute of limitations for filing criminal charges against perpetrators of child sexual abuse, according to The Philadelphia Inquirer. The new legislation will also increase the window for sexual abuse victims—who were abused at age 23 or younger—to file suits civilly against their abusers, giving victims until they reach the age of 55 to file a lawsuit.

The law had previously allowed for victims to file suits until they were 30 years old.

“This has been a long and trying process, and we are finally at the finish line,” Rep. Mark Rozzi, the prime sponsor of the bill, said according to the local paper. “Justice is coming.”

Legislators within the state are even attempting to change the state’s constitution to open a two-year window for adult victims to retroactively sue their abusers or institutions who protected them. The proposed amendment was passed by the legislature in November, but identical legislation will need to be passed a second time in the new year ahead as part of the upcoming legislative session and will also need to go before voters before an amendment could be made.

California has also followed suit signing its bill into law in October to allow childhood sexual abuse victims more time to file lawsuits against alleged abusers, according to The Los Angeles Times. Under the California law, that statute of limitations for reporting childhood sexual assault increased from the time a victim was 26 years old to 40 years old and victims will also have a larger window to file a lawsuit connected to any alleged abuse.

The bill also includes a three-year window to revive claims of sexual abuse for those whose claims may have expired because of statute of limitations, the paper reports.

“We shouldn’t be telling victims their time is up when in reality we need them to come forward to protect the community from future abuse,” the bill’s author Assemblywoman Lorena Gonzalez said, according to the paper.

Legislators in California also attempted to target childhood sexual abuse another way—by going after the protection “penitential communications” have historically had in the state.

Although clergy are considered mandated reporters of sexual abuse—along with teachers, physicians, social workers and other professions—in California, conversations made during confessions are protected, allowing clergy members to maintain secrecy of those who confess abuse, according to Slate.

State Sen. Jerry Hill (D-Calif) sought to strip away that clergy-penitent privilege in 2019 through the introduction of SB 360, although he has so far been unsuccessful.

The bill, as originally introduced in February, would have removed the exemption, according to a press release from Hill’s office.

An amended version passed the Senate in May, and would have only required clergy members to report information about crimes revealed during confessions if the conversation involved other clergy members or coworkers.

The proposed bill sent a shockwave through the Catholic Church with many leaders vehemently opposing what they believed was a violation of first amendment rights.

The California Catholic Conference called it an “attack on the sanctity of the confessional,” according to the Religion News Service.

“What I hope is clear—not only to Catholics, but to any American committed to the First Amendment—is that we are dealing here with an egregious violation of the principle of religious liberty,” he wrote.

While the proposed bill sparked strong opinions on both sides of the issue, Hill ultimately opted to suspend the bill in July after learning the legislation “would not have enough support to move on,” his office said.

“The issue remains important to me, and I will continue to champion it in the hope that my colleagues can come together on legislation,” he said. “I strongly believe that for any institution self-policing and self-investigation are not effective ways to combat alleged abuse, as our own state Legislature has found. To be clear, I have placed SB 360 on hold. The bill is on pause, it has not been withdrawn.”

Inquiries Into Abuse By Attorneys General

Attorneys General in some states are also taking a closer look at the accusations and the institutions accused of protecting accused predators.

The Hearst Television National Investigative Unit reported in April 2019 that at least three state attorneys general are looking into claims of sexual abuse and policies within the Jehovah’s Witnesses community.

One inquiry into the allegations in Pennsylvania reportedly includes Gary Tallent, the same investigator who led a shocking probe into the Catholic Church last year.

As part of the investigation into the Catholic Church, the attorney general’s office reported that 301 priests had been accused of abusing 1,000 children within the state.

"We don't think that we got them all,” Attorney General Josh Shapiro said after the release of the report, according to Lehigh Valley Live.

While each state’s efforts to address abuse differ, the message remains the same: victims of child sexual abuse are beginning to have more ways to make their voices heard.

An investigation into the child abuse policies of the Jehovah’s Witnesses by Reveal from The Center for Investigative Reporting is the subject of “The Witnesses.”