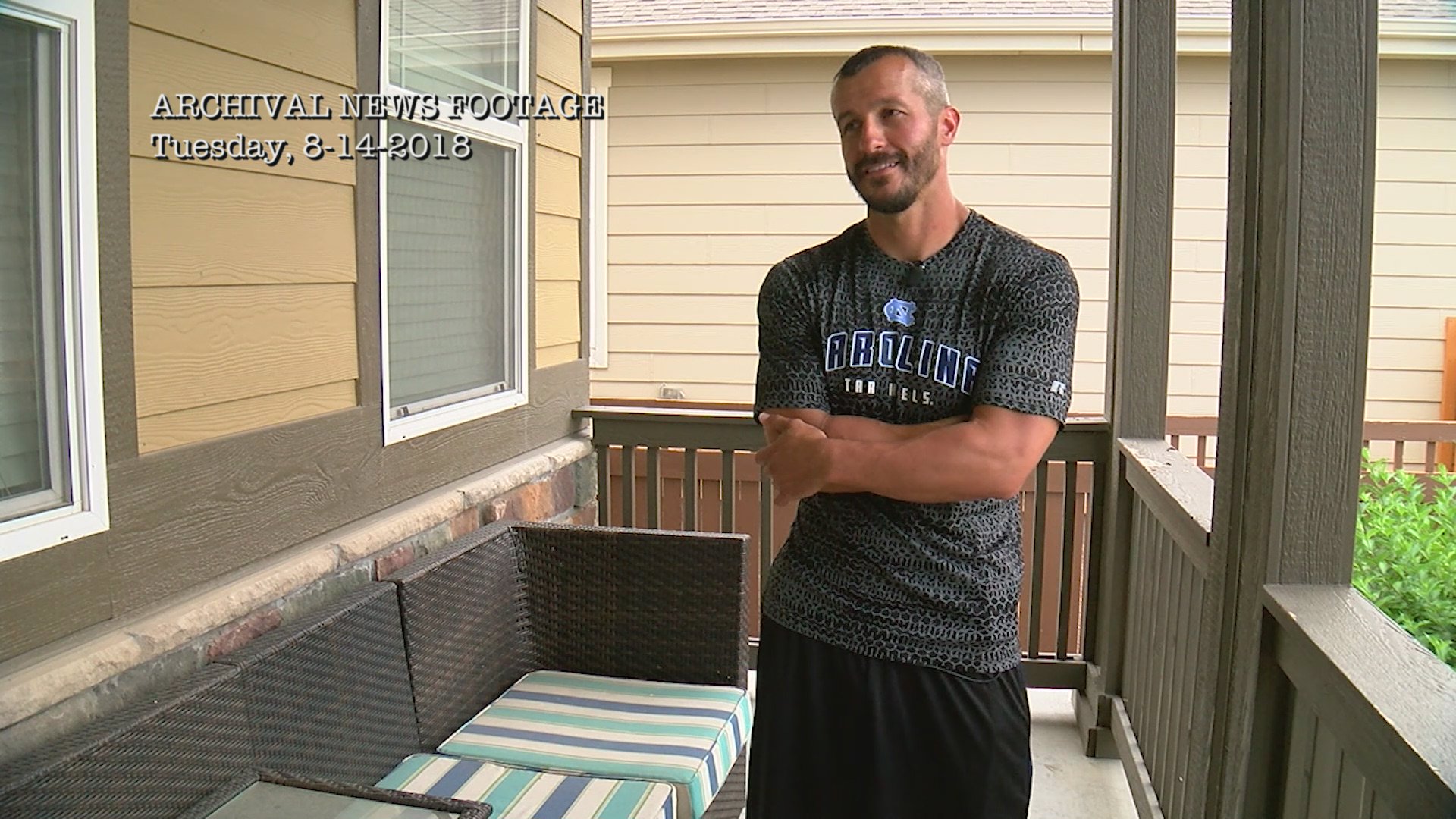 The highly publicized and truly horrific Chris Watts case has received the Lifetime movie treatment and the “ripped from the headlines” dramatization has chillingly recreated some details of the case so convincingly, the movie at times feels like a docu-series.

While some of the mimicked details are not 100 percent accurate they mostly mirror the true events of the tragic familicide. Chris Watts murdered his wife Shanann – who was 15 weeks pregnant with their unborn son – along with his two young daughters Bella and Celeste before dumping their bodies at an oil site owned by Chris’ former employer in Aug. 2018. During his trial, prosecutors pointed to Chris’ affair with his coworker Nichol Kessinger, as a catalyst for the killings. Watts was sentenced to life in prison for the killings.

Lifetime’s “Chris Watts: Confessions of a Killer,” which premieres on Jan. 25, dramatizes the family, the affair between Chris and Kessinger, and the weeks leading up to Watts' brutal murder of his family. Here are all the elements of that the show gets just right.

In real life, both Chris and Shanann were regular users of Thrive, a weight loss supplement that promises to help boost energy and increase overall health through patches, pills and shakes. Shanann worked as a promoter and advertiser for the marketing company Le-Vel, which makes the product. She could often be seen in online videos and posts raving about it in an effort to recruit new users.

The movie features countless scenes of both Shanann and Chris wearing “Strive” patches, an obvious nod to Thrive. Chris described the patch to Kessinger’s character as being full of “vitamins and minerals” designed to help him get fit. Chris is depicted as constantly consuming Strive pills throughout the film.

“Chris Watts: Confessions of a Killer” features Shanann making multiple inspiration videos with her cell phone, often for work and often promoting Thrive. Shanann’s Facebook is full of videos just like that, such as one in which she claimed Thrive changed her life. In others, she encouraged her followers to be positive and happy. In another one she implores people to tell others that they are “amazing” to make their day.

They movie heartbreakingly recreated a real video Shanann uploaded to Facebook, in which she announced her pregnancy to Chris. In the clip, she dons an “Oops… We did it again shirt” T-shirt, a nod to the Britney Spears 2000 song “Oops, I did it again.”

The dramatized version of the video, recreated for the movie, recreates the bittersweet new baby announcement in nearly all aspects: from their little pet dachshund running around the house as Chris returns home to Chris’ outfit. Its re-enaction of Chris’ reaction to the news — him telling his wife “I like that shirt” and inquiring if the pink indicates that they are having another girl — is eerily spot on.

One of the dramatized videos included in the movie showed Shanann revealing that she was diagnosed with Lupus. Four months before she was killed, she went on Facebook Live to talk about how she "beat the odds" to have children despite a lupus diagnosis.

'He lied about everything,' said Nichol Kessinger on November 15, 2018 in Denver, Colorado. Kessinger said Chris Watts told her he was finishing up divorce proceedings with his wife and that a month into their relationship he told her the divorce was final. (Photo by RJ Sangosti/The Denver Post via Getty Images)

The affair with Nichol

Much of the movie focused on Chris’ extramarital affair with this coworker Nichol Kessinger. It showed him taking Kessinger to a romantic camping trip to sand dunes, leading to his wife feeling distant, both of which were ripped from the real saga. The movie also depicted him being dishonest about the status of his marriage. He told Nichol in the movie that he is married, but separating and working on finding a new living situation.

That matches with what the real Kessinger told Denver Post in 2018. She claimed Chris wasn’t wearing a wedding ring to work when they began dating. She said he claimed to be separating from his wife and near the end of divorce proceedings,

In his emails to her, included in a set of documents released by the Weld County District Attorney’s Office and obtained by Oxgyen.com, he told her, “I’m a straightforward guy. Lying just complicates things."

That was, obviously, a lie.

Documents showed that she was helping him look at apartments for his separation long before he ever expressed anything of that nature to Shanann.

In the movie, Chris took Kessinger out for her birthday and gave her a birthday card with a gag-worthy poem inside: “Your energy is insane. You heat me up, you make me melt and you cool me down like rain.”

That references verbatim a hot pink birthday card, obtained by Oxygen.com, that Chris sent to Kessinger. At the top of the card, Watts scribbled some lyrics from “Take You There,” a 2013 track by the reggae rock group Through the Roots: “Your energy is so insane/You heat me up, you make me melt and then you cool me down like rain.”

Kessinger turned over that card, along with other sappy love letters after she suspected something was odd about Watts' behavior within a day of him killing his family.

Tension between Chris' family and Shanann

The movie suggested that there was some tension between Chris' family and Shanann. His dad made a disparaging comment about her in the film, even after Shanann was dead.

That is based on some real reported tension. Chris' mother spoke about some the family tension to WTVD, a station from Durham, North Carolina in 2018, claiming that Chris changed after meeting Shanann. Chris told investigators that his mom and sister didn’t like Shanann and that they thought they thought Shanann “had taken me away from them," according to interviews obtained by Oxygen.com.

Not only did his dramatized media interview after they were reported missing include some of how Chris verbally responded but it also perfectly mirrored his mannerisms, the way he shifted the weight of his body and his stuttering during the ordeal.

Throughout the movie, the wardrobe of Chris along with the home decor of the Watts' family home was chillingly matched to their real-life inspirations. In some scenes – such as the media interview scene and in bodycam footage – his outfits were a splitting image to the real thing.

From the Strive patches to the clothing on Chris and Shanann's bodies to their hair and facial air, the actors (Sean Kleier and Ashley Williams) morphed into the real life players.

In the movie, the actress portraying Colorado Bureau of Investigation agent Tammy Lee (Brooke Smith) basically told Chris that it would be stupid of him to take a lie detector test if he had anything to do with his family’s disappearance.

“The coolest thing about this is that right now there’s only one person in this room that knows the truth and in about five minutes there’s going to be two of us,” she told him in the movie.

That matches exactly with what the real Lee told the real Chris.

In the movie, Chris also asked to talk to his father while being interrogated, which is just what happened in real life. Having his dad present led to his initial confession, even though that confession was partially false. He admitted to his dad that he murdered his wife, but initially made up that Shanann killed their children.

Everything from the wardrobe to body language, to of course dialogue, in both the dramatized interrogation footage and bodycam footage of the is incredibly similar to the real footage.

One chilling moment of the movie depicted, through bodycam footage, Chris watching his neighbor’s surveillance cam footage of him backing his truck into his driveway to load in his family’s bodies before dumping them at an oil site. Both in the real bodycam footage, and the dramatized footage for Lifetime, Chris became visibly nervous as he watched it on his living room television. He put his hands over his head and stammering.

The movie depicted how investigators visited Chris in prison for a final follow-up five-hour-long interview months after he was sentenced to life behind bars. In real life, Watts confessed for the first time to everything.

He explained in horrifying detail how it was him who murdered his daughters, not his wife, and he explained how he did so.

The movie reenacted this interview, in which he explained how he killed his family and dumped them at a  workplace oil field. He explained how Bella's last words were "Daddy, No!" words that haunt him to this day, which is just what Chris told investigators in real life.

Chris not only finally revealed in his real full confession how he killed his daughters, but how Shanann didn’t fight back when he killed her. He said she didn't so much as scratch him as he looked down on her while strangling her. When one of the investigators asked him why he thinks she didn't battle him, he offered the theory that Shanann was thinking of the Bible.

The movie accurately depicted that Chris thought that Shanann having sex with him before he killed her was a "test" on her part, a bizarre accusation he made during that interview.

Interestingly though, the movie changed the interview depiction drastically. In the film, Chris claimed that Shanann did in fact fight back and the movie even depicted his version of events at first, showing a heated battle between the two. In the movie-version, it was Lee who realized that his version could not be true as there were no defensive wounds found to match his account.

The movie also changed the final conversation between Shanann and Chris. In the movie, he admitted to the affair but in real life, he claimed he never did.