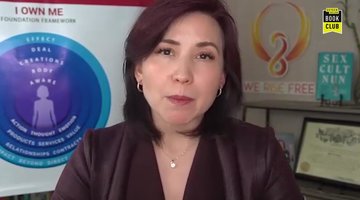 The inner world of a cult is usually a mystery to those outside it — but in Faith Jones' new memoir, life inside the notorious religious group "The Children Of God," which became infamous due to accusations of sexual abuse and exploitation, is explored.

And Jones wasn't just any member. As described in "Sex Cult Nun: Breaking Away from the Children of God, a Wild, Radical Religious Cult," she was cult royalty, the granddaughter of the group's founder. The fascinating, moving memoir was selected as Oxygen Book Club's December pick.

Oxygen digital correspondent Stephanie Gomulka recently spoke with Jones to learn more about why she wanted to write the book, her experiences in the cult, adjusting to life after she left, and more.

"[Children Of God] started out in 1969 in California ... it was recruiting idealistic teens and hippies to a life of devotion and service to God. They were forsaking everything, they lived communally, they spent their days studying the Bible and memorizing scripture and preaching and teaching and signing on street corners," Jones explained to Gomulka, adding some of the teachings were likely to  "justify my grandfather's own inclination for extramarital sex."

When asked how to describe "Sex Cult Nun," Jones described it as "intimate" and "personal."

"It's an intimate and personal story, a coming of age story about growing up in a secretive religious cult that was founded by my grandfather. The story gives people an intimate look into the organization ... and then I write it from my perspective in the moment at that age starting from my perspective as a young child ... I wanted to give this picture of how [cult members] think and thought inside of this. And then it's my journey through many countries of learning and understanding ... and finally leaving, emancipating myself and really going after my education and creating the framework around which my work is built today," Jones said.

To discover how life after the Children of God was "culture shock after culture shock" and learn why she chose the writing perspective she did for the memoir, watch the video, above.