Sign Up for Free to View
‘It Just Became Like A Circus:’ Author Of ‘Blood & Ink’ Breaks Down 1922 Hall-Mills Murder Crime Scene 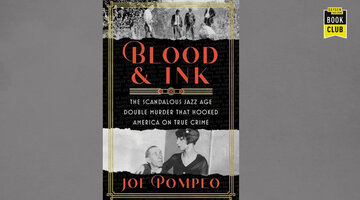 It may seem like people are more fascinated by true crime shows and podcasts than ever before, but an interest in murder stories is nothing new, as demonstrated in Oxygen Book Club's October 2022 pick, "Blood & Ink: The Scandalous Jazz Age Double Murder That Hooked America on True Crime" by Vanity Fair reporter Joe Pompeo.

The nonfiction read explores the shocking 1922 murder of a reverend named Edward Hall and his mistress, Eleanor Mills. The two were found dead on a farm in New Jersey with torn-up love letters near their bodies. The murders — along with the shocking revelation the church official was cheating on his heiress wife — led to a media firestorm.

In a recent interview with Oxygen digital correspondent Stephanie Gomulka, Pompeo described why he wanted to write about these murders, the impact tabloids had on the case, the "Pig Woman" testimony, and more.

"I guess the elevator pitch for the book is that it is a wild, roaring '20s murder mystery and it's also the story about the birth of American tabloid culture," Pompeo said.

He was partially inspired to write the book because of his own ties to New Jersey, where the crime took place.

"I reconnected with a graduate school professor of mine from the Columbia Journalism School who's a journalism historian and we were talking about different old murders from the 19th century and early 20th century and she mentioned the Hall-Mills case in New Brunswick, so immediately my ears perked up ... just the sound of it was just so fascinating and it had all the elements: this murdered minister from a wealthy family having an affair with a woman from his choir who is found dead with in a Lover's Lane," he explained.

It wasn't just the shocking and unusual elements of the crime itself that intrigued Pompeo. He also was fascinated by the way the murders intersected with the rise of tabloids.

"So, this was such a media sensation that it's hard to convey what it would have been like in the 1920s, when really the media was dominated by newspapers ... this was a newspaper story from from day one. Given that this happened in central New Jersey, pretty close to New York City reporters could swoop in on a train ride or a fairly short short drive from their offices in Manhattan ... There was a such a public interest and fascination with his case, I think because of all the sensational elements, because of the people involved," Pompeo said. " ... so for a tabloid newspaper, this was basically like God came down and just gave them this this story."

For more on Gomulka's interview with Pompeo, watch the videos above.