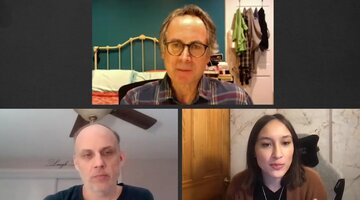 Whether you're a fan of "Twin Peaks" or simply enjoy absorbing true crime stories, "Murder at Teal's Pond: Hazel Drew and the Mystery That Inspired Twin Peaks" by David Bushman and Mark T. Givens is a must-read. That's why the book, which investigates the 1908 murder of a domestic servant that influenced the iconic series, was selected as Oxygen Book Club's January 2022 pick!

So, once you've finished reading the book yourself, consider examining these discussion questions with your friends:

1. Were you a fan of "Twin Peaks" before reading the book? If not, will you watch the series now?

2. Why do you think Minnie, Drew's aunt she was so close with, was reluctant to share information with the police? Did it make you trust her more or less?

3. "Twin Peaks" co-creator Mark Frost was inspired by Hazel Drew's murder, but he had heard it as more of a local ghost story or urban legend from his grandmother. Are there any similar stories you've heard in your own hometown?

4. What details of crime-solving in the 19th century did you find most interesting? Do you think with scientific advancements this murder would have gone unsolved today? Why or why not?

5. The authors work to create a full portrait of murder victim Hazel Drew. What words would you use to describe the woman they attempt to bring to life?

6. Wild rumors and gossip seemingly influenced the investigation. Can you think of modern murder cases that were derailed by salacious rumors?

7. What are your impressions of the DA who supervised the investigation, Jarvis O’Brien?

8. The authors reflect on how gender and class may have affected the investigation into Hazel Drew's death. In your opinion, what was the most egregious example of that, if any?

9. Ultimately, who do you believe killed Hazel Drew, and why?

10. If you are a "Twin Peaks" fan, what connections did you draw between the series and Hazel Drew's story?

And if you have more thoughts let us know! Use the hashtag #oxygenbookclub to keep the discussion going on social media.

Calling All True Crime Fans
Oxygen Insider is your all-access pass to never-before-seen content, free digital evidence kits, and much more!
Sign Up for Free
All Posts About
Oxygen Book Club