Sign Up for Free to View
‘I Wanted To Give An Exposé Of Murders Using Poisons:’ Author On New Book And Symptoms To Look Out For 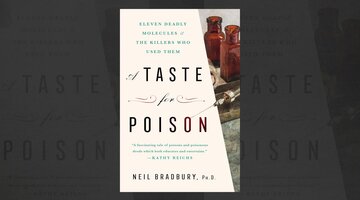 Now Playing
1:59
Digital Original
‘I Wanted To Give An Exposé Of Murders Using Poisons:’ Author On New Book And Symptoms To Look Out For

When you hear the word "murder," you may think of death by an obvious weapon like a knife or a gun. But some killers opt for a quieter, more subtle method: poison.

Poison and the way it can kill is the focus of Oxygen Book Club's April 2022 pick, "A Taste for Poison: Eleven Deadly Molecules and the Killers Who Used Them" by Dr. Neil Bradbury. Dr. Bradbury recently sat down with Oxygen digital correspondent Stephanie Gomulka to discuss why he wanted to write this book, what people should know about poisons, and more.

"I wanted to give an expose of murders using poisons to explain how the body reacts to poisons and how different poisons give rise to different symptoms because they attack different parts of the body. If you've been poisoned you may be able to tell the medics just what you've been poisoned by giving them the symptoms you've experienced [from reading this book] as you lay there dying!" he explained.

Dr. Bradbury has a background in physiology, but there was plenty of research needed to get the book just right.

"It was something my wife was distressed about — finding all these lists of websites of poisons. I had to convince her I was researching a book and not intent on doing away with her," Dr. Bradbury joked.

One misconception Dr. Bradbury had before completing the book was that poisoners are more likely to be female. But during the course of his research, he discovered there was no real gender breakdown. Plenty of men have used poison before to kill for all sorts of reasons.

"Probably disconcertingly there is an overrepresentation of people in the medical field using poisons. There are people who kill for money, for monetary gain, for inheritances ... a classic example is so-called 'angels of death' who assume they are putting people out of pain and misery ...[One story Dr. Bradbury found] was a nurse who was poisoning patients not with the intent to kill the children, but to to poison them so she could rescue and save them and be hailed as a hero," he explained.

To learn more about the book, what poisons to look out for and how to protect yourself, watch the video above.