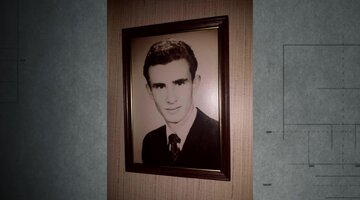 2:18
Preview
Why Did This Have to Happen? 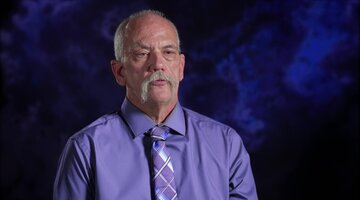 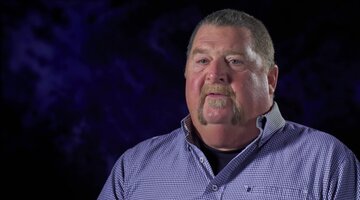 2:13
Exclusive
Investigators Look Back on the Confusing Details of the Carl Gaimari Case

Becky Gaimari, just 15 years old, called the police when she got home from school on April 30, 1979.

“Her words were: ‘There’s been a robbery, my dad’s been shot,’” Inverness Police Detective Bill Stutzman told “An Unexpected Killer,” airing Fridays at 8/7c on Oxygen.

“As we entered through the front door, we were met by Becky Gaimari,” Barrington Police Department Deputy Marshall Scott Davis told "An Unexpected Killer." (The Inverness Police Department was re-established in 2009, according to the Chicago Tribune, after it had been outsourced to the nearby town of Barrington starting in 1975.) “She was crying and pointing downstairs. I went downstairs and saw a male who was leaning back in the sofa who appeared to have numerous gunshot wounds."

Jacquelyn "Jackie" Gaimari was crying at the feet of her husband, Carl Gaimari, a 35-year-old trader at the Chicago Board of Trade (CBT).

They learned Carl had gone to work while Jackie was home with the kids and Becky was at school. Bobbi had been on the couch watching TV at around 12:30 when two men wearing stocking masks and dark clothing came in through the back door, which had been unlocked.

“They point the guns at her,” said Cook County State’s Attorney’s Office prosecutor Maria McCarthy. “And they ask her, 'Where’s your mother?' So Bobbie leads these men to the master bedroom where Jackie is on the phone. They ask Jackie for her money, and she says, ‘I only have $20,’ and they said, ‘We’re here for more than that.’”

The men tied them up and put them in the closet. When Becky came home at around 3, she heard crying and found her family banging on the closet doors.

“Once Becky opens up the closet doors, Bobbie went directly down to the basement and Bobbie found her father’s bloody, bullet-ridden body laying on that couch,” said McCarthy.

The widow and her daughter helped police create composite sketches as other investigators canvassed the neighborhood.

Back at the crime scene, a family friend appeared.

“I noticed someone approached me and he pulled out his credentials as being a Chicago police officer and told his name was Sam Greco,” said Davis, who was still at the crime scene. “Sam said that he was a family friend. The girls knew Sam, they felt comfortable around him.”

Greco was also a rather famous Chicago Police Department hero: In 1969, according to the Chicago Tribune, Greco was shot three times in the course of apprehending Pete Ristich, 57, a member of the Friday Night Gang that had become known for holding up bars. He was made a detective from his hospital bed but, due to his injuries, was unable to return to the force until 1975. (He left the force on disability in 1979 after the Gaimari murder.)

“He said that he had been called by the daughter [Becky], that something had happened so he was coming out to see what assistance he could lend,” Inverness Police Detective Mike Kirby told "An Unexpected Killer." “He had advised them that he had been on the phone with Jackie — this is about 12:30 in the afternoon —and that, during their conversation, she said that somebody was there and he heard some voices in the background and then the call was disconnected."

The records of the two calls between Greco and the Gaimari house showed the time frame of the burglary and murders was between 12:30 p.m. and 3:00 p.m. The amount of time they spent in the house was long and many items of value hadn't been taken, so it left police officers questioning what the motive really was. Investigators decided to talk to Jackie in more depth, where they learned more about their marriage.

Watch More Episodes Of 'An Unexpected Killer' In Our Free App

“Carl and Jackie had a rather unorthodox situation at times,” said McCathy. “Over the years, they both had affairs and they would bring their lovers home.”

Jackie told police that, by 1979, the couple had decided to re-commit to monogamy and one another — including renewing their wedding vows. She said that she'd broken off the relationship with Greco around the time she'd gotten pregnant with her youngest son, Nick, but the two had remained friendly.

That was when they struck up a romantic relationship. Greco confirmed that the two had ended the affair and remained friends, and police concluded he was not a suspect after he allowed them to take fingerprints and go through his phone records.

Leads were starting to dry up: None of the fingerprints from the crime scene matched, the composite sketches released to the media resulted in no tips, and, it turned out, Carl was shot with two guns the burglars had taken from the master bedroom closet when they locked the rest of the family up, according to the Chicago Tribune.

“A couple days after the original murder, somebody had put a threatening note in the mailbox,” said Davis. “Jackie went to the police and said she was being threatened and that was her concern for her safety.”

Police weren't able to tie anyone to the note, but Greco moved in with the Gaimari family a week after the murder, the Tribune reported.

The case went cold — and stayed that way for 30 years.

Meanwhile, Jackie and Sam Greco married four months after Carl's murder and moved to California, which Greco told the Tribune was to help with the chronic lung infections that had scuttled his police career.

But by 1986, he told the paper that he'd missed Chicago and the police force and the family moved back to Chicago. Greco soon got his wish and rejoined the force in 1987, after passing a battery of fitness tests. 1987 was also the year that Carl Gaimari's estate finished going through probate, as he'd died without a will, according to the Tribune. Jackie Gaimari Greco, the paper reported, collected more than $600,000 once the estate settled, not including the value of the house.

They invested at least part of it in a bar on Chicago's North Side, but divorced in 1990. (According to the Daily Herald, the bar burned down in an arson for which no one was ever prosecuted; Jackie told police that the building hadn't been properly insured and the fire ultimately bankrupted her, according to the Tribune.)

The murder still haunted the family. Bobbie Gaimari, who was locked in the closet with her mom and was the first to find her father's body, ultimately died by suicide in 2009, which the family attributed to her guilt over having assumed that she left the back door open on the day her father was killed, according to the Daily Herald. Becky Gaimari Wykel developed an addiction problem, which she eventually overcame.

After the Inverness Police Department was reconstituted in 2009, Stutzman and Kirby were asked to take on the cold case murder of Carl Gaimari. At the time, they were not sure if there would still be witnesses left alive — and they discovered that all the physical evidence in the case, including the cigarette butt recovered from the scene and the fingerprints, were destroyed in two floods in the Barrington Police Department basement.

“One of the people who they reinterviewed was Jackie’s sister, Tootsie,” said McCarthy. (Tootsie's given name is Elsie Fry.)

“She said, ‘I’ve been ridden with guilt throughout the years. I’ve seen what it did to the kids, what it did to his family. I can only be truthful about this, I can only tell you what was told to me,’” said Stutzman.

She explained that two months prior to the murder Jackie had said she had fallen out love with Carl and wanted to get rid of him.

Tootsie told her she shouldn't do that and should just divorce him. But Jackie said divorce would mean she didn't get all the money.

Police convinced Tootsie to try to coax Jackie into admitting what she'd done while they recorded it.

“I’m not doing good, honey,” Tootsie said in one police recording. “The police have been here about Carl, and they’ve been asking me a lot of questions and they’re saying I might have to go in front of the grand jury. I don’t know if you remember what you told me?”

“Oh my God,” said Jackie. “Just tell them that I wished he was dead. Don’t tell them I said that, please.”

“I already… they already know, Jackie,” said Tootsie. “You told me how it was going to be done, how they were going to break in and tie you up and put you in the closet and then kill Carl.”

Police got a warrant for Jackie's arrest and brought Jackie back in for questioning. After hearing the recordings, Jackie admitted there had been a plan but claimed that she had backed out of it long before Carl's murder.

Jackie was charged with first-degree murder on March 27, 2013 and went to trial in October 2016. After days of testimony — including from her daughter Becky — she was convicted and sentenced to 30 years in prison, according to the Tribune.

Kirby told "An Unexpected Killer" that the hero cop implicated in the case, Sam Greco — who Jackie repeatedly implicated at trial — was not charged because he died of natural causes.

An obituary in the Chicago Sun-Times indicates that Greco died in March 2018.

Gaimari-Greco's conviction was overturned on appeal in 2020 when the court ruled that the jury had not received proper instructions about how to consider her claims that she'd withdrawn from the murder plot before Carl was killed. She pleaded guilty to murder in 2021 in exchange for a 22-year sentence under 1979 terms, which would allow her to be released relatively early, according to the Daily Herald.

She is currently incarcerated in the Logan Correctional Center in Lincoln, Illinois, according to jail records. She's eligible for parole in March 2024, and is scheduled for release in March 2027.

For more on this case and others like it, watch "An Unexpected Killer," airing Fridays at 8/7c on Oxygen, or stream episodes here.

Georgia Mom Interrupted A Burglar, So He Killed Her

A Florida Grandmother Conspired To Kill A Navy Vet