Italian-born fashion designer Gianni Versace had it all: a successful business, mansions around the world, celebrity friends and millions in the bank, but none of it could protect him from a crazed serial killer who took his life along with four other victims in the spring and summer of 1997. Before committing suicide, Andrew Cunanan cut a swath from Minneapolis to Miami, his killings careening from former lovers to crimes of opportunity, his victims including millionaires, war veterans, real estate developers and cemetery caretakers.

Andrew Cunanan grew up in a working class suburb of San Diego, California, the youngest of four children. His Filipino-American father and Italian-American mother enrolled him in an exclusive prep school, where a yearbook called him "Most Likely to be Remembered,” according to CBS’ "48 Hours." For his senior yearbook quote, Andrew chose one by King Louis XV: “Apres moi, le deluge,” which translates to, “After me, the Flood.”

He reportedly had a genius level IQ of 147, and friends and acquaintances recall him as being fashionable, flamboyant and prone to exaggeration. When he was 19, his father fled the country to avoid embezzlement charges, forcing his mother to move into public housing.

Openly gay since high school, Cunanan bounced between the LGBT communities of San Diego and San Francisco after dropping out of college. He earned a reputation for pursuing the affections of older, wealthier gay men, who would fund his lavish lifestyle. According to CNN, his own mother described his as a “high-class” male prostitute and he also allegedly sold drugs.

Andrew was a skillful liar, and with his clients, he went by personas such as “Andrew De Silva, a Hollywood CEO with a mansion on the Riviera,” or “Lieutenant Commander Cummings, of Choate and Yale, importer of antiques,” according to Newsweek.

One reporter said, “[Andrew] knew about the arts, the right kind of fork to use, the right cognac to drink [...]. He was in a class of his own as a gigolo.''

While living in Hillcrest, San Diego’s affluent gay enclave, he befriended Gulf War Navy veteran Jeff Trail, who later moved to Bloomington, Minnesota, outside Minneapolis. Also from Minneapolis was David Madson, a successful architect who Cunanan had a brief romance with during one of his San Francisco stays.

After a bad breakup with a wealthy older man in San Diego, Cunanan booked a one-way ticket to the Twin Cities after begging for a extension from one of his maxed-out credit cards. During his final night in Southern California, he said, “I’m not coming back. People don't know me. They think they do, but they don't.''

According to the Chicago Tribune, Madson picked him up from the airport on April 25, 1997, and they spent the night together. On April 27, police say Cunanan left a message on Trail’s answering machine, inviting him over to Madson’s loft. Neighbors reported hearing a loud argument inside the apartment that night. What the heard was the beginning of Andrew Cunanan’s killing spree.

When David Madson didn’t show up to work on Monday and Tuesday of the following week, his friends went to his apartment to check on him. From the outside they could hear his pet Dalmatian, Prints, barking and called police. Inside, detectives found the dead body of Jeff Trail wrapped inside a rug. He had been beaten to death with a claw hammer, his face pulverized.

On Saturday May 3, fishermen found Madson's body on the shores of a lake an hour north of Minneapolis. He had been shot in the head and back three times with a gun which police believe initially belonged to Trail.

In Madson's stolen red Jeep Cherokee, Cunanan then made his way to Chicago’s affluent Gold Coast district, where he brutally killed 72-year-old real estate developer Lee Miglin. Miglin’s hands and feet were bound, his head wrapped in masking tape with an air hole for his nostrils. He had been stabbed repeatedly in the chest, had multiple broken ribs and his throat was ripped open with a gardening saw. His body was discovered by his wife when she returned home from a business trip, and following the murder, Cunanan was placed on the FBI’s Ten Most Wanted Fugitives list.

With around $10,000 in stolen cash and several of the dead man's suits, Cunanan left town in the Miglin’s dark green Lexus. According to a Vanity Fair article from September 1997, police believe he then drove to New York City, where he stayed for the next several days. On May 9, Cunanan crossed paths with 45-year-old William Reese, caretaker of the Finn's Point National Cemetery in Pennsville, New Jersey. Cunanan shot him in the head in order to steal his red pickup truck.

He then headed south to Miami, where he spent the next two months holed up in a low-rent hotel and cruising the city’s gay nightlife. The hotel night manager where Andrew was staying said he was a quiet tenant who paid in cash and never brought anyone back to his room. He also said Andrew often changed his appearance, dying his hair different colors and wearing it curly or straight.

According to Vanity Fair, Andrew would often go out all night long “dressed to the nines,” frequenting local gay bars and clubs.

One bar manager said, ''He was very good blending in with people. He was always near the center of the bar, always the center of attention, but I don't think anybody knew him very well.''

The manager of Twist, an upscale gay bar just blocks from Versace’s mansion, said that in the week leading up to Versace’s murder, he saw Andrew in the bar “two or three times.” The manager said that for some reason, when he caught a glimpse of Andrew leaving Twist one night, he felt sick to his stomach.

He said, “I turned to the bartender and said, ‘There goes the gay serial killer.’ Then I dismissed it, like it couldn’t be true.”

On the morning of July 15, 1997, 50-year-old Gianni Versace walked to his local coffee shop to pick up the morning papers. As he was putting the key in the door of his luxurious Miami Beach mansion, Cunanan walked up from behind and shot him twice in the head. Though he was able to flee the crime scene, witnesses identified him to police. 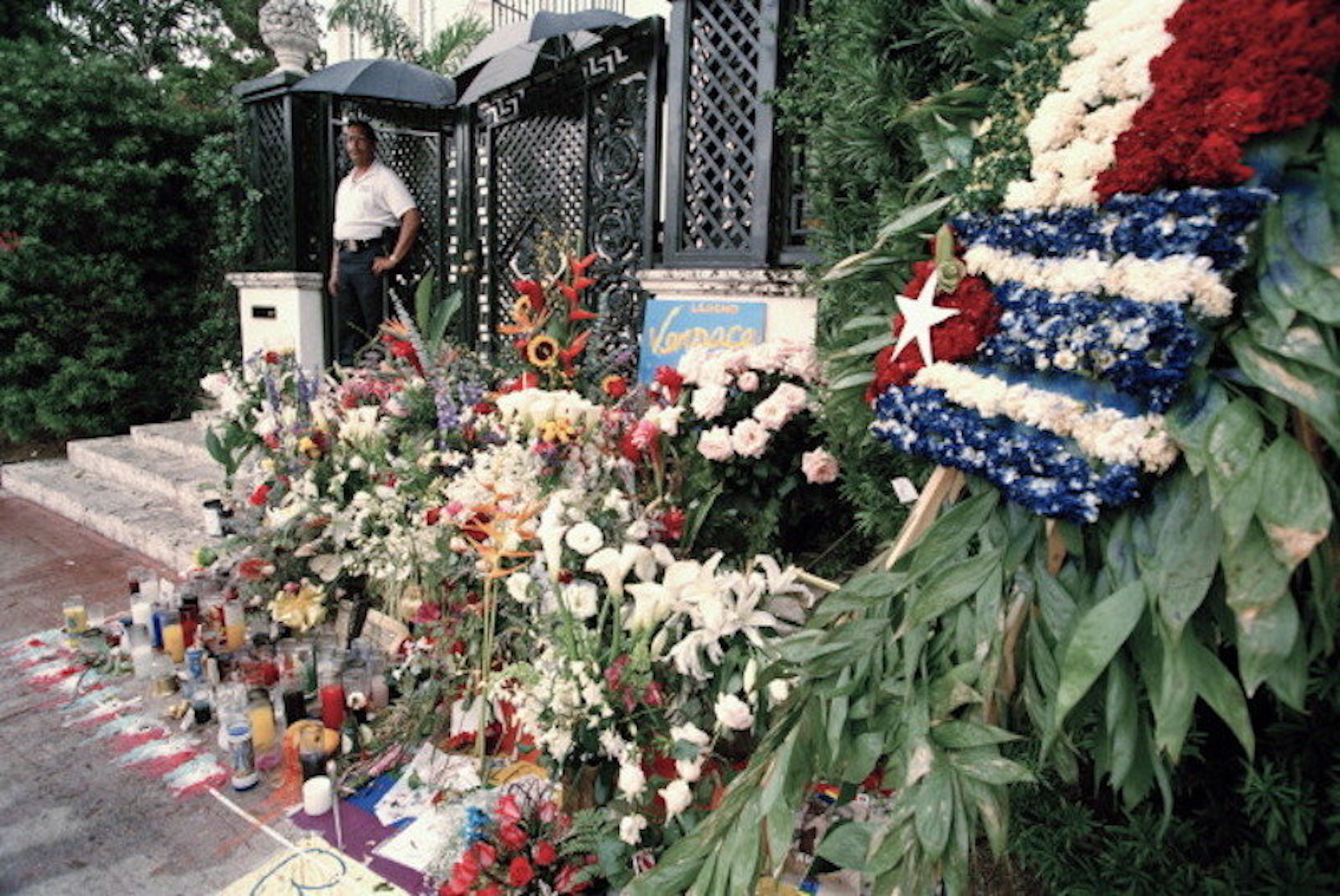 After a nine-day manhunt, police believed they had found him, after the caretaker of a houseboat called 911 when he noticed signs of a break-in and heard a gunshot. After a four-hour standoff, police boarded the boat and found Cunanan’s body in an upstairs bedroom, dead from a self-inflicted gunshot wound to the temple. He was 27 years old.

Andrew Cunanan left behind no suicide note, and to this day, police puzzle over his motives and choice of victims. Did he know Lee Miglin? Had he ever met Gianni Versace before? Despite rumors and conjecture, there is no proof he did, and with his death we’ll never know. 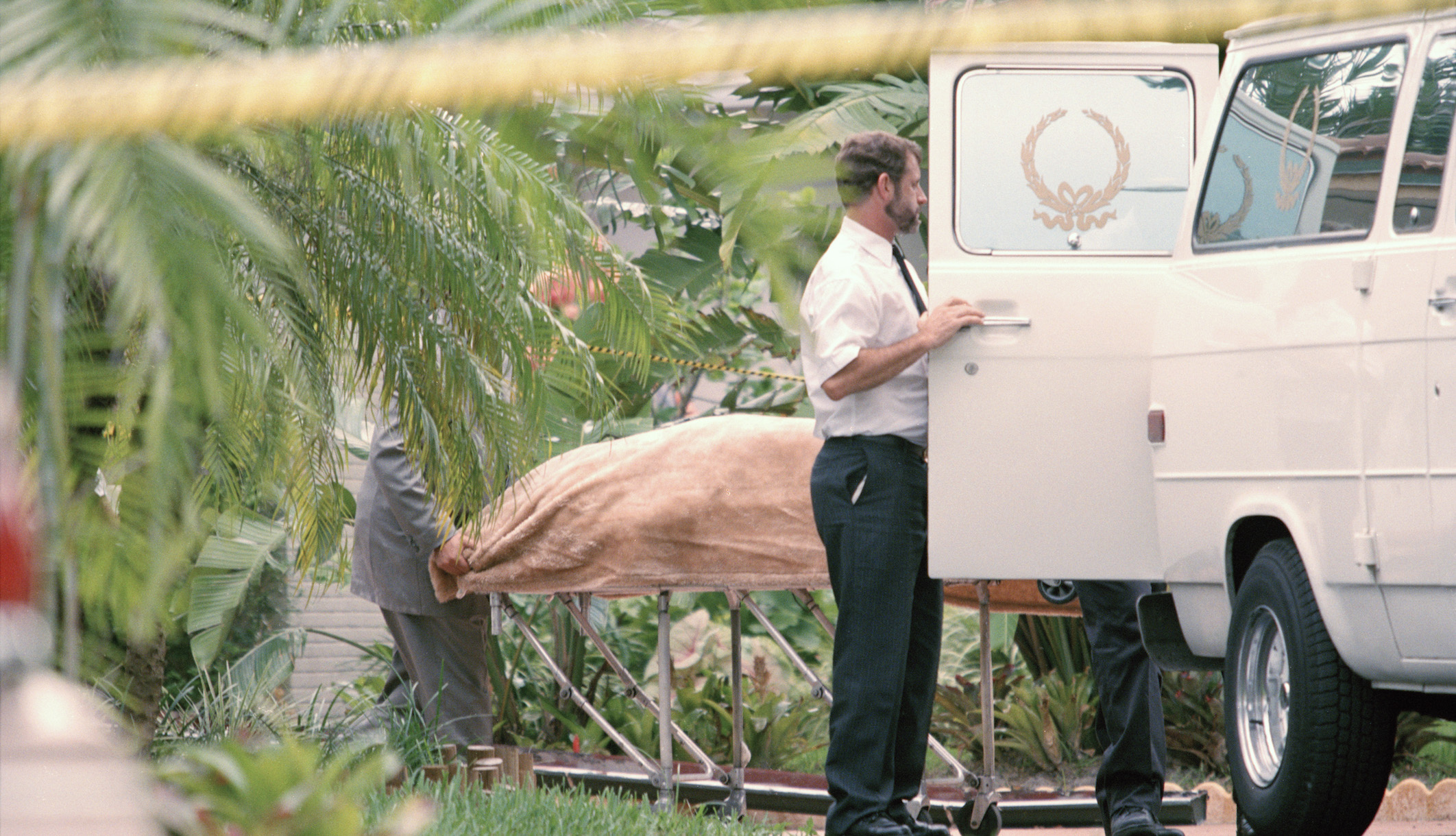 Season two of Ryan Murphy’s acclaimed FX television series "American Crime Story" deals with Cunanan’s crime spree and the fashion icon’s murder. The Versace company has called the series “a work of fiction,” and the designer’s former partner, Antonio D’Amico, said the portrayal of his murder is “ridiculous.”

To hear about Andrew Cunanan's relationship with Versace and more, listen to episode 60 of “Martinis & Murder,” "The Killing of Gianni Versace." Oxygen's one-hour special, "Killing Versace: The Hunt for A Serial Killer," is also now available to stream.

All Posts About
Crimes Of The '90s
You May Also Like...
Recommended by Zergnet
Latest in Murders A to Z