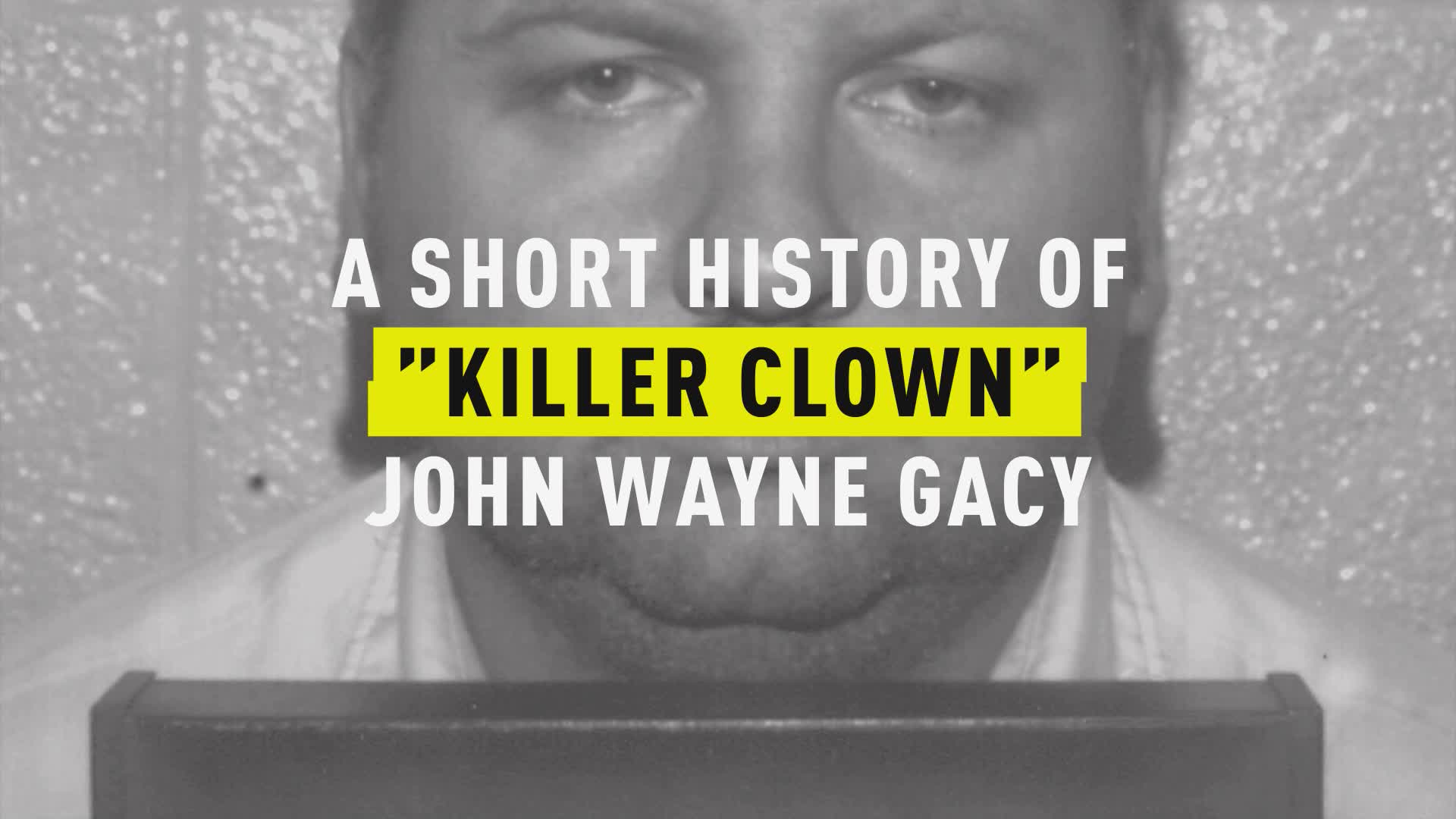 Among American serial killers, John Wayne Gacy is the third most prolific, with only “Green River Killer” Gary Ridgway and Ted Bundy logging more victims. Between 1972 and 1978, he raped, tortured and murdered at least 33 teenage boys and young men, in most instances burying them in the crawl space beneath his home in the Chicago suburbs. Like other serial killers, he gave the outward appearance of normalcy. In Gacy’s case, he rose to a position of prominence in the local Democratic Party, and performed at children’s charity functions as “Pogo The Clown,” giving rise to “The Killer Clown” archetype in popular culture.

Gacy was born in Chicago, Illinois on March 17, 1942, the middle child and only son of working class factory workers John and Marian Gacy. Gacy's father was allegedly an abusive alcoholic and beat Gacy, who was unathletic and bullied at school. His troubled relationship with his father would haunt him throughout his life, with his first wife, Marlynn Myers, blaming it for his mental problems.

She told The New York Times soon after his 1978 arrest, “He and his dad did not get along. They were never close.”

Gacy and Myers were married in 1964, after a dating for less than a year, and moved to her hometown of Waterloo, Iowa. There, they had two children, a boy and girl, and Gacy managed three Kentucky Fried Chicken restaurants owned by his father-in-law. He joined the United States Junior Chamber, also known as the Jaycees, a national civic group which, in an odd coincidence, fellow serial killer Ed Kemper also belonged to. He was named “Outstanding Vice President” of the Waterloo Jaycees in 1967.

Gacy may have impressed people as an affable go-getter, but his charmed life in Waterloo was about to come crashing down around him. In May 1968, he was accused of forcing two teenage boys to perform oral sex on him, in one case chaining one of them up and choking them, according to The New York Times. He later hired an 18-year-old to beat up one of his accusers, according to court documents. He eventually pleaded guilty to a charge of sodomy involving a minor and was sentenced to 10 years in prison. While Gacy was incarcerated, his wife petitioned for divorce and was granted full custody of their children, who allegedly never saw him again.

From all reports, Gacy was a model prisoner, and as a result he was released after just 18 months. His father had died while he was in prison, and upon his release, he moved back home to live with his mother in Chicago. In 1971, they bought a ranch-style house together at 8213 W. Summerdale Ave on the city’s northwestern edge. That same year, he was arrested  after a teenage boy claimed Gacy tried to force himself on him. The charges were dismissed after the victim failed to show up and testify against him.

Gacy’s first murder occurred on January 3, 1972, when he picked up 15-year-old Timothy McCoy outside the Greyhound Bus Station in Chicago. McCoy had been traveling over the holidays and was later stabbed to death by Gacy at his home. Afterwards, he became the first of 26 victims buried in the crawl space underneath the house.

In the summer of 1972, Gacy married Carole Hoff, a divorcee with two young daughters, all of whom moved into his home. A week before the wedding, he was arrested for aggravated battery and reckless conduct, which later court documents referred to as a “sex related offense.” Gacy allegedly posed as a police officer and forced a young man to perform oral sex on him, but the charges were later dropped.

Though he harbored violent sexual urges and acted on them by dark of night, Gacy’s public standing was beyond reproach. He was popular with his neighbors, who thought him a dutiful husband and father, and ran a successful contracting business, PDM Contractors, which employed many of the area’s young men and teenagers. He was a precinct captain in the local Democratic Party, and had his picture taken with First Lady Rosalynn Carter when she visited Chicago in 1978. Perhaps most disturbing, he often donned clown makeup and appeared at fundraisers entertaining children as “Patches” or “Pogo The Clown,” performing magic tricks.

Gacy claimed to have next killed in 1974, though the identity of this victim has never been confirmed. In summer 1975, 18-year-old PDM employee John Butkovich went missing after going to Gacy’s to pick up a paycheck. Gacy was questioned about Butkovich’s disappearance, but he was never a suspect. His skeleton was later found buried underneath Gacy’s garage.

After four years of marriage, Gacy and Carole Hoff’s divorce was finalized in March 1976. Now with the house all to himself, his murder spree went into overload. From April 1976 to December 1978, he murdered 30 males, ranging in age from 15 to 21 years old. Some of them may have been as old as 30, but police can’t say for sure, as they remain unidentified to this day. His victims ranged from male prostitutes and runaways to employees of his construction business and others, simply unlucky to cross paths with a deranged and sadistic serial killer. On at least two occasions, he killed two victims in the course of a single day.

Gacy employed a variety of methods to ensnare his victims. He would offer to pay them for sex, impersonate a police officer, offer them drugs and alcohol or invite them over to watch pornography. Once in his house, he often used what he called “the handcuff trick,” where he would convince his victim to put on a pair of handcuffs, under the guise of showing them how to get out of them. Once shackled, he would rape and torture them, before killing them with what he called “the rope trick,” strangling them with a tourniquet knot. He would then bury their remains underneath his house in the crawl space. When that finally became too full, he began dumping their bodies in the nearby Des Plaines River.

On at least two occasions, Gacy released his victims after hours of torment. In December 1977, he abducted 19-year-old Robert Donnelly at gunpoint, and raped and abused him throughout the night at this home. He later dropped him off at the department store where he worked. Police caught up with Gacy, but when questioned, he told police he and Donnelly had consensual “slavery sex,” a story they apparently believed. In March 1978, Gacy abducted 26-year-old Jeff Rignall, chloroforming him, before taking him back to his house for hours of sexual and physical assault. He was later dumped at Chicago's Lincoln Park. After recovering from his injuries, Rignall staked out the highway exit where he was abducted until he spotted Gacy’s car, then tracked him to his home and alerted police. Both men later testified against Gacy during his murder trial.

Gacy’s final victim was 15-year-old Robert Piest, whom he abducted and murdered on December 11, 1978. Numerous witnesses saw Gacy talking to Piest at the pharmacy where he worked talking about a summer job at PDM. Police began investigating Gacy and discovered his history of sexual abuse. At one point during the investigation, Gacy allegedly told one of the detectives assigned to follow him, “clowns can get away with murder."

John Wayne Gacy was arrested on December 21, 1978, after the second of two search warrants was executed on his home. Officer Daniel Genty found an arm bone within minutes of searching the crawl space underneath the house, yelling up to his fellow police, "Charge him, I've got one!" Gacy would eventually confess to killing over 30.

“He never showed any emotion,” Greg Bedoe, investigator with the Cook County Sheriff's Police Department at the time, told the Chicago Tribune. “I cannot emphasize this enough: He has never in my dealings with him showed one ounce of remorse or sorrow or sympathy.”

On March 12, 1980, Gacy was found guilty on 33 counts of murder. Though the trial lasted 28 days, with Gacy’s lawyers pursuing an insanity defense, it took only two hours for the jury to reach their verdict. Two days later, he was given the death penalty, with the Sarasota Herald-Tribune reporting that applause broke out in the courtroom upon hearing the sentence.

Gacy spent the next 14 years on death row at Illinois’ Menard Correctional Center. He filed numerous appeals, and even began proclaiming his innocence, recanting his prior confessions, but his conviction and death sentence were upheld. He spent his free time painting morbid images of his alter ego Pogo The Clown, and selling them to collectors of the macabre.

With all his appeals exhausted, John Wayne Gacy was put to death by lethal injection on May 10, 1994. Though his reported last words were “Kiss my ass,” this may be apocryphal, as the only record at the time quoted him saying that "taking his life would not compensate for the loss of the others and that this was the state murdering him," according to Illinois Corrections Director Howard Peters.

Of Gacy’s 33 known victims, six remain unidentified, according to the Cook County Sheriff’s Office. In 2017, police used DNA evidence to identify the remains of 16-year-old James Haakensons of St. Paul, Minnesota, who went missing in the summer of 1976, and whose skeleton was found in the crawl space underneath Gacy’s house of horrors. Questions still remain as to whether Gacy claimed more victims than is known or whether he acted alone or with accomplices.