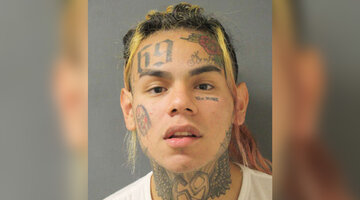 Who sunk her teeth into Beyoncé?

The mystery stems from an interview that actress Tiffany Haddish gave to GQ. She says that she met the superstar at a party last December and watched as an actress attacked her.

“There was this actress there,” says Haddish, “that's just, like, doing the mostest...She bit Beyoncé in the face.”

The "Girls Trip" star refused to name the biter but she described the aftermath with Beyonce and husband Jay-Z.

“So Beyoncé stormed away,” she says, “went up to Jay-Z, and was like, ‘Jay! Come here! This bitch—’ and snatched him. They went to the back of the room. I was like, ‘What just happened?’ And Beyoncé's friend walked up and was like, ‘Can you believe this bitch just bit Beyoncé?’"

Apparently the actress continued to cross paths with Haddish. Haddish says she told Beyoncé, “I'm going to beat somebody ass at your party. I just want to let you know that.”
Beyoncé asked her not to do that. Instead, they took a selfie together.

Haddish says that she spoke to Jay-Z later.

Beyonce's rep, Yvette Noel-Schure, refused to comment on the story. “I absolutely cannot comment on any of this, as I have no knowledge,” she told GQ.

Internet sleuths have become obsessed with finding out who bit Beyoncé. An array of suspects have been thrown out, including Sanaa Lathan, Taraji P. Henson and Sara Foster, according to Vulture.

Initially, Chrissy Teigen claimed she had knowledge but then rescinded that statement. However, some of the suspects took to social media to clear their names:

"Y’all are funny. Under no circumstances did I bite Beyonce and if I did it would’ve been a love bite," tweeted Lathan.

Foster was asked to comment by "The Insider." She denied the allegations, joking that she wished she could get that close to Beyonce, on Instagram Stories.

After calling the culprit, "the worst," Teigen admitted her investigative skills were wrong too. "Update it is NOT the person I think is the worst. IM DONE," she tweeted.

Update it is NOT the person I think is the worst. IM DONE

Who do you think bit Beyoncé

Calling All True Crime Fans
Oxygen Insider is your all-access pass to never-before-seen content, free digital evidence kits, and much more!
Sign Up for Free
All Posts About
Beyonce
Jay Z