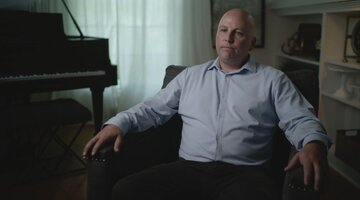 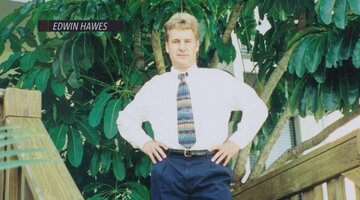 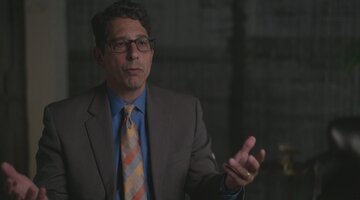 1:20
Exclusive
Elizabeth Hawes Testified On Her Own Behalf

Edwin, 46, was missing and he hadn’t gone to work, according to his roommate Martin Weltman. Edwin’s Volkswagen Passat was missing from the driveway of the Andover, Minnesota home they shared. In its place was what looked like blood.

Investigators confirmed it was indeed blood, a “significant” pool of it, Dan Douglas, Anoka County Sheriff’s Office Lieutenant, told “Killer Siblings,” airing Saturdays at 6/5c on Oxygen. Blood was also found splattered on the side of the house and near the driveway.

Authorities’ alarm bells, already tolling loudly, were intensified by the smell of bleach, possibly used in a botched effort to clean up the gore. A piece of a crossbow, hammers, and a baseball bat, each painted black, were found strategically hidden in the house as though for an ambush.

Weltman, who raised no red flags, said that there were long-simmering tensions between Edwin and his sister, Elizabeth, 43, and brother, Andrew, 36. Part of that friction stemmed from their upbringing, according to Edwin’s ex-wife, Christina Miller. She told producers that their mother, Demetria Hawes, played her kids against each other as they grew up in Golden Valley, a suburb of Minneapolis. Elisabeth sided with Andrew, a diabetic.

But 20 years earlier, the Hawes brothers found some harmony. After Andrew launched a yard-care business as a teenager, Edwin joined up with him. Edwin oversaw finances, while Andrew ran the crews and repair of Hawes Lawn Service.

It grew to be “huge around the Twin Cities,” Miller told “Killer Siblings.”

Then, in the spring of 2007, a rift emerged that was just as huge. Andrew found a second set of books and figured that his big brother was swindling the business.

The family also found out Edwin, who had power of attorney over his grandmother, had sold her stocks believed to be worth $600,000 without her approval, twincities.com reported in 2010.

Edwin left the family business, but his absence didn’t mend the bitter discord. He filed an order of protection against his brother and sister, the Grand Forks Herald reported in 2010.

A history of family violence emerged. The fight over the inheritance had led to the arrest of Andrew, who allegedly tried to run Edwin off the road with his car, according to the outlet.

As a family picture came together, investigators learned that deputies on routine patrol had been near Edwin’s home at 2 a.m. on October 30. In the early morning hours they came upon a parked vehicle — a Hawes Lawn Service truck — about a mile from the home in a golf course parking lot.

Elizabeth and Andrew were both discovered nearby. She admitted to being at Edwin’s home, a violation of the restraining order.

She was arrested for violating an order of protection, while Andrew was allowed to drive away in the business truck. She was released that same afternoon, though.

Investigators returned to the golf course area and found a crossbow that had been painted black like the piece in Edwin’s driveway. They also discovered a jacket, a jug of bleach, and a pair of bloodstained rubber gloves.

Investigators were concerned that Edwin had been killed and urgently set out to find him and his siblings.

They went to the home Andrew shared with his grandmother, but that was a dead end. Meanwhile at Elizabeth’s home in Minneapolis, investigators spoke to her husband, Daniel Romig, who denied knowing where his wife or her younger brother were.

Then the case shifted to Cottonwood County, some 200 miles away. Andrew’s girlfriend, Kristina Dorniden, 29, had a farm in the rural area.

Anoka County authorities asked Cottonwood County officers to check out the farm. Around midnight on October 30, Matthew Smith, a former Minnesota State Trooper, left his routine duties and headed to the property. When he arrived there, he spotted a massive bonfire, and found Elizabeth near the blaze.

Smith reacted to a strange sizzling sound coming from the bonfire. It was a sound that could have been made by wet wood, but there’d been no rain — so the officer poked the fire pit with a pitchfork.

“I didn’t expect to find human remains,” he told “Killer Siblings.” “Here I am looking at a skull.”

The former trooper recalled to producers what Elizabeth said to him: “That’s not my brother in there.”

Anoka County authorities were alerted and they immediately set out for Cottonwood County. They suspected the remains were those of Edwin Hawes. Authorities doused the fire to preserve evidence.

At around 2 a.m., Dorniden returned to the bonfire area. She told officers she was looking for Elizabeth and the three of them were staying at Dorniden’s parents’ farmhouse. Officers observed blood dripping from the tailgate of the truck she was driving.

Anoka County authorities arrived around 7 a.m. Because Dorniden told officers there were hunting guns present in the farmhouse, a SWAT team was brought in to apprehend Andrew, according to “Killer Siblings.” They busted in and found Andrew sleeping.

On October 31, 2008 Andrew, his sister, and girlfriend were brought to Anoka County jail.

Bones found in the fire pit were reassembled for a thorough investigation, and it was confirmed that the torched body was Edwin Hawes.

As investigators continued to piece together the case, Romig admitted that he had heard the younger Hawes siblings discuss “repossessing” the Passat, which he believed was code for eliminating their brother.

Romig told authorities they would find the car at a church parking lot in Golden Valley. They did — and blood was found on the car inside and out. “It looked like a body had been dragged by the car,” said Young. In the trunk was a sledgehammer covered in blood.

The medical examiner’s gruesome findings revealed that Edwin Hawes’ death was caused by multiple blunt force trauma. The investigation showed that he had been shot with a projectile believed to be an arrow from the crossbow, and beaten and bludgeoned. His internal injuries were consistent with being run over by a car before being incinerated.

Investigators pieced together DNA and physical evidence and interviews. They reasoned that Edwin’s body had been in the Hawes Lawn Service truck officers discovered at the golf course.

“The amount of violence to your own flesh and blood in this situation,” Young said to producers. Twelve years after the grisly murder, Young added, “It is still breathtaking.”

Andrew appealed that sentence in 2013 but it was upheld.

To learn more about the case, watch “Killer Siblings” on Saturdays at 6/5c on Oxygen or stream the series on Oxygen.com.

Man Accused Of Beating Brother With Asperger's To Death