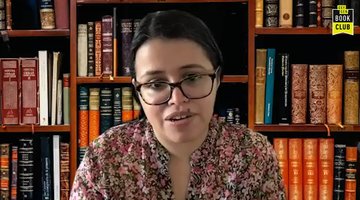 Silvia Moreno-Garcia's latest book definitely has a mystery at its center: a woman has gone missing amidst the political turmoil of 1970s Mexico, and two very different people are trying to find her. But that doesn't mean you should expect a typical thriller when you pick up this novel.

Instead, "Velvet Was The Night" is a "simmering, 1970s noir," she told Oxygen digital correspondent Stephanie Gomulka in a recent interview.

The dark, thoughtful read was selected as the October pick for Oxygen Book Club,  which highlights books in the true crime and mystery sphere each month and features exclusive interviews, guided discussions, and more.

So, what exactly is a noir?

"So, crime is a big category ... When you have a mystery, you are trying to solve a whodunnit ... and a thriller is when the stakes are pretty high and it's action-packed. ... Then you've got noir. Noir is really about character. The stakes don't have be high. In fact, in a lot of noirs the stakes are pretty low. It's interested in the dark side of the characters, in the dark side of life. ... I think people come in with expectations of a mystery or a thriller, and they look at noir and think, 'What is this?' but noir really is a different beast," she explained to Gomulka.

"Velvet Was The Night" is set in 1970s Mexico City and follows Maite, a secretary who prefers to spend her time buried in romance novels and comic books rather than real life. But when her neighbor, a glamorous art student named Leonora, mysteriously disappears, Maite is determined to discover what happened to her. But she isn't the only one — Elvis, who works as an enforcer for the government to squash political activists, is also after Leonora, as she may have crucial photographs in her possession.

The book is also classified as historical fiction and is centered around a very real period of political turmoil and conflict in Mexico.

"In the late 1960s to 1970s ... leftist groups were marching and manifesting against the oppression and the excesses of the ruling party and the ruling party did not take these activists well. In 1968, when a group of students and people were marching down an avenue peacefully, they opened fire and soldiers shot at them and killed a bunch of people and that is called the Tlatelolco Massacre," Moreno-Garcia told Gomulka. "Afterward, Mexico's government learned from that incident and instead of having the military directly intervening they formed a squad of people called Los Halcones. They were trained so they could infiltrate, torture, kill people for the government, but it was a secret group, it was a paramilitary organization."

This group, which was trained by both Mexico's military and the CIA, was eventually involved in another massacre.

"In 1971, [there's] another peaceful march of students going down a large avenue in Mexico City. This time Los Halcones are the ones who attacked. They started beating people, shooting, chasing people ... This was known as El Halconazo or The Corpus Christi Massacre. This is the incident that opens our novel," she explained.

To see more of Moreno-Garcia's interview with Gomulka, watch the video above.