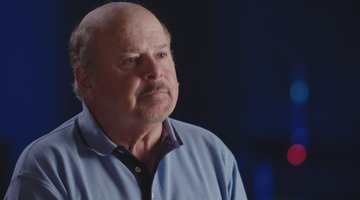 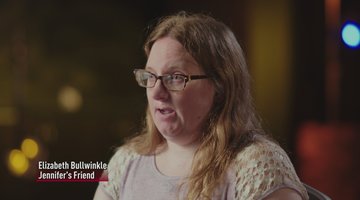 1:17
Exclusive
How Jennifer Stills’ Friend Learned She Was Killed 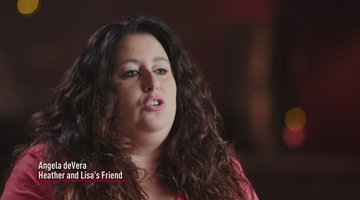 In the tight-knit community of Bridgeport, Pennsylvania, life was filled with promise for 20-year-old aspiring poet Jennifer Still.

Born with a cleft lip and palate and scoliosis that were repaired when she was a girl, Still sometimes struggled to fit in as a teen. She was often bullied in high school because of her physical differences, and the mean-spirited treatment left its own painful scars.

But in the summer of 1999, high school was in the rearview mirror for a young woman whose mother, Wendy Lavin, lovingly called a “firecracker,” according to “In Ice Cold Blood,” airing Sundays at 7/6c and 8/7c on Oxygen.

Two days after her birthday, on July 6, 1999, all of that promise and brightness vanished in an instant. When her boyfriend, Kevin, came home from work at a car wash after being away all day, he found Still lifeless on the bedroom floor. He called 911.

Montgomery County detectives rushed to the scene, where police found Still lying on her back in a pool of blood. She had been stabbed several times in the abdomen and her throat had been viciously slashed.

“It was one of the most brutal crime scenes I've ever seen,” John Cane, a retired sergeant with the Bridgeport Police Department, told producers.

In his experience, he said, the level of violence indicated “a crime of passion” and “uncontrollable anger and rage.” An autopsy showed that there were 15 stab wounds in addition to the savage slash across Still’s throat.

That alone suggested Still knew or had some sort of relationship with the killer. The fact that there was no sign of forced entry supported this theory.

A forensics team processed the crime scene, snapping photographs and taking blood samples. That included a small trace of blood in the bathroom sink.

Investigators recognized that the stray drop of blood, far from the victim’s body, could very well belong to the killer, according to John Fallon, retired detective with the Montgomery County District Attorney’s Office.

When somebody stabs someone, “it’s very likely that they cut themselves,” he said.

Investigators looked at people closest to the victim, including her boyfriend. His statement to police about being at work at the time of the murder checked out and he had no scrapes or cuts that would have likely occurred during a knife attack. When his DNA revealed that the blood in the sink wasn’t his, he was cleared as a suspect.

A number of friends in Still’s close circle were also into the fantasy role-playing game set in a world of wizards, warriors, and witches. That included a young woman named Heather Greaves as well as John Eichinger, a longtime friend of Still’s in his late 20s who was known as Acme John thanks to his job at a local market.

After explaining to detectives that he had been in New Jersey the day of the murder, Eichinger told police about D&D devotees named Danny and Destiny who might have information relevant to the case.

The tip proved useful. Detectives learned that Destiny, who said she was a witch, was in love with Still— so much so she and Still were wed in a Wiccan ceremony.

Destiny also suggested Still was possessed by demons and was going to perform an exorcism to rid her of the evil spirit. Destiny even told investigators that she’d had a dream in which she violently stabbed Still.

Still’s mother dismissed the suggestions that her daughter was into witchcraft and other “mumbo jumbo” as rubbish. Nonetheless, the media went to town with reports that the victim dabbled in dark arts.

In the end, Danny and Destiny agreed to be swabbed for their DNA, which didn’t match the drop of blood in Still’s bathroom sink. Crestfallen investigators were back to square one and eventually the case went cold.

Then, in 2005, another brutally violent triple homicide took place just 10 minutes away from where Still was murdered.

Devoted dad and grandfather George Greaves returned to his home in King of Prussia to find that his daughters Heather, 27, and Lisa, 23, and his granddaughter, Avery, had been savagely stabbed to death. Heather’s 6-year-old daughter, Melody, had been with her father during the massacre.

“There’s blood all over the place. It’s just like a slaughter here,” George Greaves said in his desperate 911 call.

The carnage was so horrific that Albert Dinnell, a retired detective with Montgomery County Forensics Unit, told producers he is still haunted by the sight of little Avery.

Dinnell and Bruce L. Castor, Jr., former District Attorney for Montgomery County, also recognized the fatal wounds were just like the ones on Jennifer Still.

One of the investigators recalled Heather had been interviewed early on during Jennifer’s case. The two cases collided and the elements fell into place when a witness outside the Greaves home told police she’d seen Eichinger leave the house while bleeding.

Investigators found Eichinger with a bandage wrapped around his hand. He claimed he’d been bitten and scratched by his dog, James Godby, a retired detective with Upper Merion Police Department, told producers.

Eichinger then insisted he was at the Ocean City boardwalk when the murders took place.

Investigators were convinced he wasn’t telling the truth and then lied to him. They told him that they had incriminating DNA evidence against him.

Eichinger confessed. He admitted he was in love with Heather and when she rejected him he stabbed her, Lisa, and Avery, who he’d known since she was a baby. Now a toddler, the girl could identify him, so he killed her.

Eichinger then confessed to killing Jennifer Still six years earlier after she had rejected his romantic advances. Once again, the motive appeared to be obsession and jealousy.

His DNA ended up matching the drop of blood in Still’s house.

In his own home, police discovered twisted keepsakes of the murders stashed away and preserved. They also learned that Eichinger would carry the murder weapon with him when he’d celebrate Halloween.

In October 2005, Eichinger waived a jury trial. A judge sentenced him to life in prison for Jennifer Still’s murder. For the slayings of Heather Greaves, Lisa Greaves, and Avery Johnson, he received three death sentences. He has tried various time since to get off Death Row.

George Greaves was awarded custody of Melody. “I needed her,” he told “In Ice Cold Blood.” “She gave me a supreme purpose.”

For Lavin, time can’t heal her devastating loss. “There is no such thing as closure,” she said.

To learn more about the case, watch “In Ice Cold Blood” on Sundays at 7/6c and 8/7c on Oxygen or stream episodes any time at Oxygen.com.

Calling All True Crime Fans
Oxygen Insider is your all-access pass to never-before-seen content, free digital evidence kits, and much more!
Sign Up for Free
All Posts About
Murders A-Z
Ice T
Related

'In Ice Cold Blood' Returns This March With New Episodes