Sign Up for Free to View
Questions “Smiley Face Killers: The Hunt for Justice” Hopes to Answer 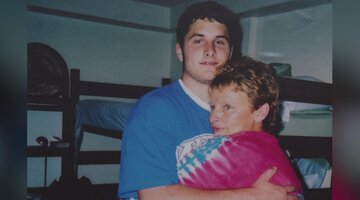 Since 1997, hundreds of college-aged men across the country have died as the result of undetermined or accidental drownings. Former New York Police Department detectives Kevin Gannon, Michael Donovan and Anthony Duarte, along with professor of criminal justice Dr. Lee Gilbertson, believe that most of these drownings are homicides. The team of investigators are convinced the deaths are the work of serial killers they have dubbed the Smiley Face Killers, referencing the eerie spray-painted smiley face symbol left at many of the body recovery sites.

Could the mysterious drownings really be coverups for brutal murders, or are they just part of another conspiracy theory?

"Smiley Face Killers: The Hunt for Justice," premiering January 19 at 7/6c on Oxygen, takes a deep dive into some of the cases to find out. Here are questions surrounding three drowning deaths that the series will try to answer:

Brian Welzien: Vanished After Attending A Y2K Celebration In Chicago

Brian Welzien was a junior at Northern Illinois University when he disappeared in Chicago after a night of celebrating Y2K with his friends. The 21-year-old's body was found 77 days later on a beach in Gary, Indiana, 30 miles south of Chicago. Police said there were no signs of foul play, and his death was ruled an undetermined drowning. Investigators believed he could have walked to the edge of Lake Michigan, a five-minute walk from the hotel at which he was staying, and fallen into the water. An autopsy, however, revealed he had no water in his lungs and a blood alcohol concentration so low that he could have legally driven a car. Police have not said if a smiley face was present near the death site.

Question: Though close to Welzien's hotel, the path to Lake Michigan was not an easy one. Was it possible for Brian to cross multiple lanes of high-speed traffic and even scale down a wall to get to the water where investigators believe he fell in?

Question: Why was Brian’s body missing for such a long period of time and so far away from where he went missing?

"Smiley Face Killers: The Hunt For Justice" retraces his steps and uncovers how long it would take a body to travel from Chicago to Gary, Indiana.

Lucas Homan, 21, vanished from La Crosse, Wisconsin, following an Oktoberfest celebration with friends on September 29, 2006. The morning of October 2, Homan's body was found not far from the shore of the Mississippi River. His death was ruled an accidental drowning, making Homan the eighth accidental drowning case in La Crosse over a nine-year period. An orange spray-painted smiley face was found not far from the spot investigators believe Homan was abducted.

Question: Homan did not like the water, and he reportedly told his parents he would never go near the Mississippi River. Why would someone so averse to water be drawn to it if this was an accidental drowning?

Question: Homan's sweater allegedly had orange flecks resembling the color of the smiley face symbol. Could it be a link to the killer?

The "Smiley Face Killers" crew interviews family members and teams up with experts to test his sweater.

Tommy Booth: Disappeared From A Bar In Pennsylvania

Tommy Booth was 24 when he went missing on January 19, 2008 from a bar in Woodlyn, Pennsylvania. Surveillance video captured Booth entering the bar, but there is no video evidence of him ever leaving. About two weeks after he went missing, his body was found facedown in a creek near the bar in an area that was previously searched. His death was ruled a probable drowning. A smiley face was painted on a wall of the bar under a deck.

Question: Booth's last call on his cell phone started with the area code 777 and was "not a valid private number anywhere in North America." Could the number have been dialed by the possible killer?

To find out the answers to these questions and more, watch “Smiley Face Killers: The Hunt For Justice," premiering January 19 at 7/6c on Oxygen.

Calling All True Crime Fans
Oxygen Insider is your all-access pass to never-before-seen content, free digital evidence kits, and much more!
Sign Up for Free
All Posts About
Smiley Face Killers
Related